Another action-packed week in the poker world drew to a conclusion yesterday, with the 2011 NBC National Heads-Up Poker Championships coming to a close. A star-studded field of 64 players entered the event… 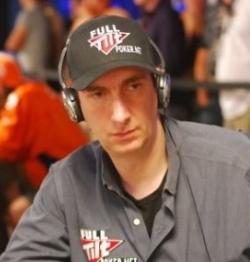 Another action-packed week in the poker world drew to a conclusion yesterday, with the 2011 NBC National Heads-Up Poker Championships coming to a close. A star-studded field of 64 players entered the event, with big names including Phil Ivey, Daniel ‘jungleman12’ Cates, Phil ‘OMGClayAiken’ Galfond, Tom ‘durrrr’ Dwan, Doyle Brunson, Chris Moneymaker, Jonathan Duhamel, and well the list of names goes on and on!

One of the big names who was most overlooked before the event began was Full Tilt Poker Pro Erik Seidel. He really struggled the first four times he entered this event, however last year he blasted his way through the field to finish second (losing to Annie Duke in the final), but this year he managed to turn his fortunes around and take down the event for a massive $750,000 payday.

Seidel had a very tough road to the final and defeated Vanessa Selbst, Jennifer Harman, and Andrew Robl before taking his seat against Chris Moneymaker. After the event Seidel praised how Victory Poker Pro Andre Robl played, stating:

“There really were a lot of tough matches.  Robl was really tough and that was one that really stood out to me.”

In the first match of his heads-up encounter against 2003 WSOP Main Event Champion Chris Moneymaker, Seidel slowly chipped away Moneymaker’s stack and had crippled him to just 13 big blinds. Seidel min-raised holding A2 and Moneymaker moved all-in holding 910, and the flop of J85 gave Moneymaker a straight draw, and the 7 on the turn sealed the straight and gave him a double-up. However shortly after this hand he lost all-in to Seidel’s three-of-a-kind Jacks, giving Seidel victory in the first match.

The second match was a much closer encounter, and on the decisive hand the chip stacks were pretty even. Moneymaker made a check-raise all-in holding K10 on a flop of 955 however Seidel was sitting pretty with three-of-a-kind yet again holding 45 with the hand giving him victory in the event for a payday of $750,000.