Erik Seidel Returns to the Top of the GPI 300

American Erik Seidel has returned to the top of the Global Poker Index (GPI) 300 after his fantastic results from last year’s PCA moved into Period 3. 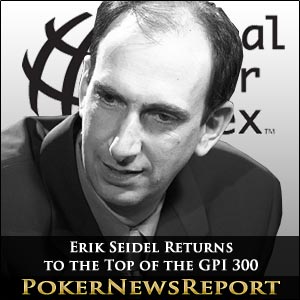 American Erik Seidel has returned to the top of the Global Poker Index (GPI) 300 after his fantastic results from last year’s PCA moved into Period 3.

New Yorker Seidel had no scores in Period 3 before this latest rankings update, so has now jumped above a fellow American in 25-year-old Jason Mercier – who just last month earned $709,767 for winning the $100,000 buy-in No-Limit Hold’em High Roller event from the Doyle Brunson Five Diamond World Poker Classic at The Bellagio in Las Vegas.

Team PokerStars Pro Mercier, from Hollywood, has 2,986.07 points, which is 28.27 less than the last update, while Seidel has seen his score leap 136.49 to 2,988.29, although the former could well return to the top of the GPI within the next few weeks as some of Seidel’s biggest scores drop into Period 3.

A notable big mover is French-Canadian Jonathan Duhamel, who has seen his ranking shoot up 41 places – following an increase of 30 the previous week – to take him to just outside the top 10 in 11th spot on 2377.58 points.

The 52-year-old – who has eight World Series of Poker (WSOP) bracelets to his name – continued his incredible start to 2011 with third place for $618,139 at the AUD$100,000 buy-in No-Limit Hold’em event at the Aussie Millions in Melbourne, before adding $2,472,555 for his first place finish at the AUD$250,000 buy-in Super High Roller No-Limit Hold’em tournament before January was out.

Meanwhile, French Triple Crown winner and Team PokerStars Pro Bertrand ‘ElkY’ Grospellier may have lost 5.4 points, but he still holds third spot on the GPI 300 with 2,823.70 to remain ahead of fourth-placed Brooklyn-based Team PokerStars Pro Eugene Katchalov (2,760.52 points), of Ukraine.

Former Team Full Tilt Poker Pro Shawn Buchanan continued his rise inside the top 10 as he moved above English star Sam Trickett into fifth place after the Canadian increased his points total by 241.64 to 2,672.49. At the same time, Titan Poker Team member Trickett saw his total stay the same.

As the 2010 WSOP main event champion has no vital scores ageing over the next few weeks, expect the 24-year-old to move into the top 10 next time.

Players will also be looking to results from the Aussie Millions to affect their rankings by the time February begins, while last year’s staging of the event will see scores drop into Period 3.

Home favourite Brendon Rubie, of Sydney, secured the first event in Melbourne, taking down the AUD$1,000 No-Limit Hold’em opening tournament on Sunday for $205,895 so has started the event out in fabulous fashion.
But last January’s results will undoubtedly hit players such as Seidel and Nottinghamshire’s Trickett hard.

Seidel managed a third place in the AUD$100,000 No-Limit Hold’em event then, but will see that score drop into Period 3 next time out, while his win at the AUD$250,000 Super High Roller will fall into that period the following week. Those changes could possibly allow Mercier to return to the top of the GPI.

In the meantime, an enormous 27 players cracked the top 300 on the latest rankings, with Russian Leonid Bilokur making the biggest impact by landing at 97th on 1,529.15 points.

Bilokur picked up $1,134,930 for winning the $25,000 buy-in No-Limit Hold’em Eight-Max High Roller at the recent PCA – and that score ensured he made the biggest impression on the GPI.

Then there is San Jose’s Faraz Jaka, who made 145th place on the GPI his own after finishing third in the PCA main event for $755,000 to see him return to the top 300 after one week outside.

As we always emphasise at Poker News Report, that means 27 players must have dropped out of the rankings, including some of the game’s biggest names in Hendon Mobster Dave ‘The Devilfish’ Ulliott, former Team Full Tilt Poker Pros Erick Lindgren and Praz Bansi, Team PokerStars Pro Joe Hachem, Phil Laak and Ted Forrest.

The biggest climber of the week is Canadian Andrew Chen as the Ontario man gained 119 places to sit at 96th on 1,531.13 points after a successful stay at the Atlantis Resort and Casino.

Andrew Chen Zooms Up to 96th

The first two of those events count towards the PokerStars player’s rankings, with the High Roller tournament coming into play in the next GPI 300.

Chilean [geolink href=”https://www.pokernewsreport.com/partypoker”]Party Poker[/geolink] player Nicolas Fierro (up 103 places to 81st on 1,603.75 points) and Isaac Haxton (up 94 to 40th on 1,876.51), who lives in Vegas, also did well out of the PCA after finishing in fifth and third places respectively in the $25,000 No-Limit Hold’em Eight-Max High Roller, while Vegas-based former Team Full Tilt Poker Pro Scott Seiver – who had been a top 10 member back in November – moved up 81 places to 52nd on 1.751.91 points after chopping the $5,000 No-Limit Hold’em Heads-Up Championship with Thomas Gabriel for $78,210.

However, there were also huge losers as the likes of Canadian Will Molson dropped 165 spots to 296th on 1,055.23 points after his incredible run of top two finishes at the PCA’s $25,000 No-Limit Hold’em Eight-Max High Roller ended at three when he finished out of the money this year.

The Montreal pro saw his win at last year’s event drop into Period 3, while his second place from 2010 fell into Period 5, so chopping down his points tally.

Don’t forget to check back here for the latest developments on the GPI.