Epic Poker League (EPL) expert Erik Seidel tops the leaderboard after Day 1 of the $20,000 buy-in main event at the Palms Resort and Casino in Las Vegas. 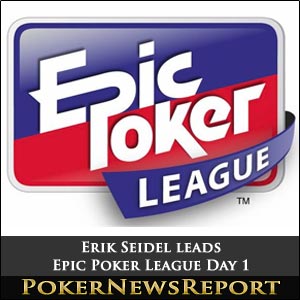 Epic Poker League (EPL) expert Erik Seidel tops the leaderboard after Day 1 of the $20,000 buy-in main event at the Palms Resort and Casino in Las Vegas.

The eight-time World Series of Poker (WSOP) bracelet winner from New York is aiming to make it three from three final tables at EPL main events as he accumulated a chip stack of 223,000 to leave second-placed Scott Clements, from Washington, as the only other player to break through the 200,000 chip barrier on 203,400.

Seidel finished fourth at the second EPL main event for $184,100 after picking up $604,330 as runner-up from the first tournament.

Those survivors from the eight-handed tables created an average chips stack of 81,967 as they test out their poker skills in various tournament situations that will result in players facing tables made up of fewer opponents every day.

The legendary Doyle Brunson was honoured with an EPL lifetime membership before play began on the opening day, made a short speech and was also allowed to announce ‘Shuffle up and deal’, before the ‘Texas Dolly’ failed to make it into Day 2.

The nine Pro/Am qualifiers from the 187-player, three-day $1,500 buy-in event did not enjoy a good day, either, with only Joe Parille – who picked up $1,130 and his seat at the main event for finishing eighth – making it into Day 2.

A quartet of women started Day 1, but only Selbst and Vanessa Rousso made it into the second day, while other survivors include David ‘Chino’ Rheem – who is attempting to win his second EPL main event after taking down event number one for $1 million – as well as Eugene Katchalov, Jason Mercier, Nam Le, Huck Seed and Hasan Habib.

All five of those men will be aiming to make a second final table on the EPL after the payouts were announced.

The champion will, of course, be handed a cheque for $801,680, as well as an EPL Championship ring.

Day 2 of the main event will be made up of five levels of seven-handed tables, while the third day’s format will be six-handed, and Day 4 is down as four-handed.

Day 5 of the event will have just four survivors, who will play down to a heads-up encounter, which will then become a best-of-three test.