Seidel has dropped out of the top 20 on the GPI 300 for the first time since its inception last year, falling a huge 17 places to sit in 23rd on 2002 points. 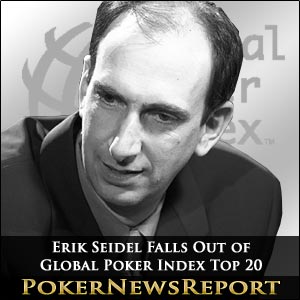 American star Erik Seidel has dropped out of the top 20 on the Global Poker Index (GPI) 300 for the first time since its inception back in June of last year, with the eight-time World Series of Poker (WSOP) bracelet winner falling a huge 17 places to now sit in 23rd on 2,002.16 points.

The Las Vegas pro – who was ranked at 20th on the first GPI list last year – lost a massive 474.42 points to result in his dramatic drop, having previously moved into the top 10 within three weeks of the rankings system being adopted.

Now, however, after steadily dropping over the past few weeks, the 52-year-old has seen his points score collapse – for the biggest drop this week – as his two WSOP Europe (WSOP) cashes from late last year aged into Period 2.

However, with both scores ageing into Period 2, Seidel now has no results within Period 1.

The Poker Hall of Famer lost 81 points from his main event score, while an enormous 227 points disappeared from his mixed game finish at Le Croisette Casino Barriere Cannes, with that latter result being excluded from Period 2 as he already has surplus of big scores.

Seidel must be concerned as, with the GPI only counting the four best scores within the top three periods, he really needs to find a good finish soon for Period 1 to halt his dramatic fall from grace.

But Seidel was not alone in seeing scores at October’s WSOPE hitting rankings hard, with Team PokerStars Pro Vanessa Selbst dropping four spots into 21st on 2,083.24 points and Englishman Chris Moorman losing 11 places to now sit in 25th on 1,952.04.

Brooklyn’s Selbst – a one-time WSOP champion – finished 28th for $9,235 at the WSOPE €3,000 buy-in No-Limit Hold’em Shootout, but saw that score fall into Period 2, where is has been omitted because of the four-event maximum rule.

So, without a new score to replace that result in Period 1, 27-year-old Selbst has lost 136 points and her place inside the top 20 on the GPI after first moving into the higher echelons of the list back on November 21 last year.

Lock Poker Team Pro Elite member Moorman, meanwhile, also exited the top 20 with his runner-up spot for $1,068,690 at the WSOPE main event last autumn also ageing into Period 2 to leave the 26-year-old from Brighton with just two scores in Period 1.

Even more pros found their GPI scores hit hard due to the ageing of WSOPE event results, with Arizona’s Sean Getzwiller suffering the biggest drop by sliding down 129 places into 247th on 1,104.04 points.

The States star lost 64 points after that main event result fell into the lower weighted category, while his Shootout score has been excluded completely as his Period 2 list is full to hit him with another 141-point fall.

Those negatives mean Getzwiller now has just two scores counting towards the vital Period 1 category – once more highlighting how crucial it is to maintain a level of consistency throughout all the periods, but particularly the most recent.

Florida’s Matt Waxman also suffered when losing 388 points – the second highest drop behind Seidel – as well as 34 places to sit in 58th on 1,659.07 after seeing two WSOPE scores age into Period 2 without having any to replace them in Period 1.

Russian Alexander Dovzhenko and New York’s Victor Ramdin also saw two WSOPE scores age, with the result being that the former drops 44 spots into 75th on 1,591.42 points and the latter loses 77 places to now be at 136th on 1,358.58.

Back at the top of the GPI, American Jason Mercier has held on to the top spot for a 10th successive week by increasing his lead over second placed fellow Team PokerStars Pro Bertrand ‘ElkY’ Grospellier by 19.54 points to hold a 216.21 advantage.

Another American pro, David ‘Doc’ Sands was, in fact, one of the few players near the top to add points to his tally – moving up two places into third for his highest ranking so far when increasing his score by 11.37 to 2,544.84.

Maryland’s Sands was ranked at 85th when the GPI debuted last summer, but has eased up the list since before making his surge into the top 10 on March 5 when zooming up 22 spots into sixth place.

New York-based 31-year-old Katchalov – who has one WSOP bracelet to his name from last summer’s 42nd staging of the prestigious festival – lost 86.25 points to now sit at 2,490.44 because his runner-up spot for $68,000 from the North American Poker Tour (NAPT) Uncasville $10,000 buy-in No-Limit Hold’em High Roller Bounty Shootout has aged into Period 3.

While the Team PokerStars Pro remains in fourth place, Sands has now opened up a 54.40-point lead on the Ukrainian by taking third on the GPI.

Former Full Tilt Pro Buchanan, meanwhile, lost a massive 335.24 points to slip two spots into fifth on 2,416.19 – mainly because three of his scores have now aged into Period 2 to leave him with just three scoring results in the top category.

That final score has been excluded from that second period due to the four-score cap, resulting in his massive points loss.

Stephen O’Dwyer Up To Sixth

Now, even with just four tournaments reporting, the GPI 300 has seen a few other upwards movers after 12 ranked players cashed at the Irish Open main event in Dublin’s Burlington Hotel.

That dynamic dozen from the €3,200 buy-in No-Limit Hold’em main event in Ireland’s capital city enjoyed big points gains, with Belgian Lock Poker Pro Kevin Vandersmissen leading the way by adding 396 to his overall tally after winning the title for $553,316.

Vandersmissen saw off 501 rivals to the crown to enjoy the biggest points gain and largest leap in the rankings after climbing 143 places to 78th on 1,569.83 points, while Canadian Sam Chartier – who earned $58,625 for his seventh place finish at the same event – just breaks into the top 20 on the rankings list for the first time when moving up 17 places on to 2,103.20.

That gave them the second and third biggest climbs, while 11-time WSOP bracelet winner Phil Hellmuth was the fourth best mover when zooming up 41 places into 51st on 1,717.00 points following his 33rd place for $12,384 on the Emerald Isle.

Phil Hellmuth Closes in on Top 50

The 47-year-old had peaked at 15th on the GPI back on December 19, but then dropped out of the top 20 the following week, before exiting the top 50 the very next week. Taking 51st on the latest list ensures this is his highest placing since that dramatic collapse.

Meanwhile, two other pros – Americans Adam Levy and Kenneth Hicks – returned to the GPI 300 after cashing in the main event in Ireland.

There were some other significant moves up the rankings, with Parisian Guillaume Darcourt climbing 48 places into 88th on 1,525.82 points after seeing his runner-up spot for $24,607 in the Barriere Poker Tour €1,350 buy-in No-Limit Hold’em main event provide him with an additional 152 points.

Dmitry Vitkind Takes Over in 69th

Moscow’s Dmitry Vitkind might not have enjoyed the biggest of moves, but he did add 69 points from his fifth place finish for $35,759 in the Russian Poker Tour (RPT) €1,825 buy-in No-Limit Hold’em Grand Final in Kiev to climb 17 places into 69th on the GPI.

You can expect to see other major changes on the next rankings list with the World Poker Tour (WPT) Vienna High Roller and main event having been completed, as has the €5,000 buy-in EPT Berlin No-Limit Hold’em main event, which was won by Belgian star Davidi Kitai.

Notably, Grospellier added another High Roller event title to his growing collection after picking up $301,992 for taking down the €10,000 buy-in event in Germany over the weekend.

The London-based 31-year-old had to overcome a tough final table that included the likes of fellow Team PokerStars Pro Viktor ‘Isildur1’ Blom (seventh for $38,828), of Sweden, as well as German duo Tobias Reinkemeier (fifth for $60,398) and Marvin Rettenmaier (third for $112,169), before ultimately defeating Englishman Moorman (second for $189,824) heads-up in the 57-player competition.

However, the WPT Seminole Hard Rock Showdown main event in Florida does not end until today, so won’t be included on the GPI rankings until next month.