Eric Sullivan ended part two of day one as chip leader on 140,700 chips in the first event of the WPT’s 10th season, placing him significantly above the average chip stack of 57,187 as day two begins. 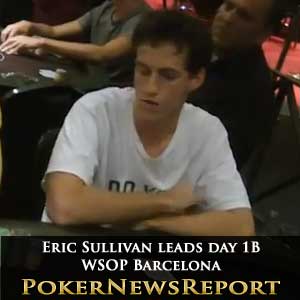 The expected larger field turned up for yesterday’s Day1B at the World Poker Tour’s Spanish Championship in Barcelona, with 122 players registered to take the total number of entrants to 216.

With the World Series of Poker (WSOP) kicking off next Tuesday in Las Vegas and a massive ash cloud covering much of continental Europe after the latest eruption of Iceland’s most active volcano, Grimsvotn, it was always going to be a struggle to match last year’s bumper entry of 326.

However, 120 fewer competitors amounts to a seriously significant drop of 37%, although there is still a rather handy prize pool of €691,200 up for grabs at the Gran Casino in the Catalonian capital city.

A total of 62 players joined the 54 left standing from Tuesday, so there will be 116 players taking their seats for day two.

Certainly, Eric Sullivan was happy how part two of day one went as he ended as leader on 140,700 chips in the first event of the WPT’s 10th season. That places him significantly above the average chip stack of 57,187 as day two begins.

The youngster was unable to contain his excitement at topping the second day of play, especially after producing a successful bluff against Dalil Masaud.

Sullivan somehow got his bluff through against Masaud on the river – even though the Belgian pro poked and probed at his opponent.

Once Masaud finally decided to fold, Sullivan showed the bluff, stood up and shouted that he was “f**king boss of this room!”

However, Sullivan won’t have things all his own way today as the likes of Polish player Szymon Pieszczoch, Briton Daniel Morgan, Frenchwoman Barbara Martinez, Denmark’s Morten Mortensen and Swede Martin Jacobson will all be back with healthy stacks.

While there was some crazy all-in plays from the likes of Jacobson, ‘Mad’ Marvin Rettenmeier, Guillame Darcourt, Dominik Nitsche – the 20-year-old German who last month took home $164,100 for winning the Merit Poker Middle East Championship event in Cyprus – and Dragan Galic, it was really a great day for the women.

Martinez has, of course, made day two, but was also joined by Maria Maceiras, Vanessa Hellebuyck, Margoux Duplantier and Irene Baroni as the women made their mark on this event.

Meanwhile, Mclean Karr was among the big-name casualties yesterday, with the vocal American seemingly easing into day two with a healthy chip stack – before coming up against Russian Artem Romanov.

Karr – who picked up €185,120 for winning last month’s WPT Vienna High Roller event – saw his dream of a second WPT title in as many months crumble as Romanov beat him with a straight.

Here’s how the American’s exit panned out. Karr got two callers – including Romanov – after raising under the gun with 7d-8d. The flop came 3c-4c-5d and Karr made a continuation bet, was called by the first opponent but then saw Romanov raise. Karr called while the other player folded to leave just two to see the turn, which came 2d.

With Karr pretty well making a pot committed bet, Romanov put him all-in for the call. The cards were turned over and the river came 2h, but Romanov had already made a straight with his 6h-4h to end the day on 98,400 chips, although he was over 100,000 after this winning hand.

Another top player to bite the dust was Nitsche, who was knocked out by Spaniard Oscar Carrasco.

Prize money will be available down to 27th place, with a minimum of €4,500 on offer, while the leading nine finishers are guaranteed at least a five-figure payout. However, the Barcelona champion will walk away with €206,000 and a seat worth $25,000 at next year’s WPT Championship.