Phil Hellmuth is still waiting for his record-breaking 12th World Series of Poker (WSOP) bracelet after finishing as runner-up once again at this year’s series of events in Las Vegas. 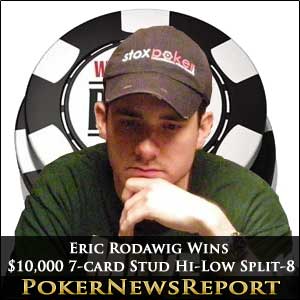 Phil Hellmuth is still waiting for his record-breaking 12th World Series of Poker (WSOP) bracelet after finishing as runner-up once again at this year’s series of events in Las Vegas.

Virginia’s Eric Rodawig was the latest opponent to block Hellmuth’s charge to No.12 – not 13 as I wrongly stated yesterday following a rush of blood to the head! – when he won his first bracelet from their heads-up clash at the $10,000 seven-card stud hi-low split-8 or better crown last night.

Poor Phil must be wondering what he has to do to collect that elusive gold bracelet after losing out to John Juanda in the 2-7 draw lowball championship last week.

However, Rodawig was in no mood to grant the Poker Brat his WSOP glory wish in the Amazon Room yesterday, having started the day as the healthy chip leader to never relinquish that top spot on his way to $442,183 from a prize pool of $1,579,200.

With 18 competitors returning last night from an original field of 168, we arrived in the money in less than 10 minutes as Jon Turner and Justin Smith were eliminated in 17th and 18th.

Los Angeles pro Ali Eslami ($51,750) was first out at the final table, having been the short stack coming in, while another Vegas player, Joe Tehan ($62,710), was next to go – even though he correctly folded a full house on the river.

He later got chopped up in a pot to be dangerously short-stacked and busted out in a disappointing seventh.

Hellmuth was the short stack for long stretches of six-handed play, but found several double-ups to move up the leader board, while Russian Mikhail Savinov – a limit-game specialist – was out in sixth for $77,222, and was soon followed by Frenchman David Benyamine ($96,836).

Four-handed play saw Vegas pro Ted Forrest go from second spot to pretty well out when calling every street against Rodawig, before mucking when he was shown two aces. Forrest ($123,904) was eliminated in fourth soon after by Hellmuth.

Rodawig, Hellmuth and Florida’s John Racener were the final three and they played on for quite some time, although Rodawig remained in control as his opponents seemingly battled it out for the runner-up spot.

But it was Racener ($171,122) who eventually finished third after losing consecutive pots to Rodawig and Hellmuth to give us our heads-up clash.

The 46-year-old poker legend was all-in several times, but Rodawig was able to hold on for the title when the last hand played out.

However, Hellmuth was again gracious in defeat, saying to Rodawig that he “played well”, before being consoled by friends Jean-Robert Bellande and Huck Seed. He also received a rousing ovation from the audience.

Top 10 placings and payouts for the $10,000 Seven-Card Stud Hi-Low Split-8 or Better Championship: