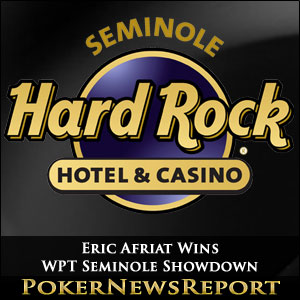 Not only did Afriat take down the $1,081,184 first prize, his win also prevented Pahuja from wrapping up the WPT Player of the Series – although it will take something of a miracle for Pahuja not to win it at next week´s WPT World Championship.

When play resumed at the Hard Rock Casino in Hollywood, Florida, the six remaining players were entering Level 33 (blinds 75,000/150,000 – ante 25,000). Despite Mukul Pahuja´s massive chip advantage, none of the players were in immediately danger. Matt Stout´s stack was equivalent to 24 big blinds as the cards were in the air, and he improved that to 33 big blinds by shoving over the top of pre-flop raises by James Mackey and Chance Kornuth in the first hand of the day to chip beyond 5 million chips..

With the exception of Chance Kornuth´s elimination on hand #14 (K♦ Q♠ < James Mackey´s A♥ 10♠), it was pretty low-ball poker played throughout the first level of the WPT Seminole Showdown final table. Mukul Pahuja increased his chip advantage when forcing James Mackey out of a 1.2 million chip pot, while Eric Afriat made some small gains at the expense of Jake Bazeley.

The pace of the game failed to accelerate through Levels 34 and 35, with one player departing in each. Matt Stout was eliminated in fifth spot when his Q♦ 10♠ missed the board and he was sent to the rail by Mukul Pahuja´s dominating A♠ 8♥, and Jake Bazeley – despite taking down a 7.25 million chip pot from Eric Afriat – was bust in fourth place when his pocket Aces were cracked by Afriat, who had flopped two pairs with J♠ 8♠.

Three-handed play lasted almost three hours; during which time James Mackey doubled up against Mukul Pahuja (A♣ 5♥ > A♥ Q♠) to take the chip lead, Mukul Pahuja doubled up against Eric Afriat to claim it back, Afriat took a 7 million chip pot from Pahuja with K♣ K♥ to put James Mackey back on top of the leaderboard, and then moved into the chip lead himself when his Q♠ 10♠ rivered two pairs against Mackey.

The heads-up conclusion to the WPT Seminole Hard Rock Poker Showdown lasted just seven hands. Eric Afriat had min-raised up to 1 million chips from the button and Mukul Pahuja had responded by moving all-in. Afriat wasted no time in making the call and the cards were on their backs:

Afriat was a slight pre-flop favourite to win the hand and the tournament; and his odds of victory improved dramatically after the flop of 5♣ 5♠ 2♦. Pahuja missed the Turn (10♦) and River (6♥), and Eric Afriat was the WPT Seminole Hard Rock Poker Showdown Champion for $1,081,184 – including a seat in the WPT World Championship where he will encounter Mukul Pahuja once again!