Eric Afriat has a substantial chip advantage over the remaining 67 players after Day 2 of the WPT World Championship, with only 36 due to cash in the event. 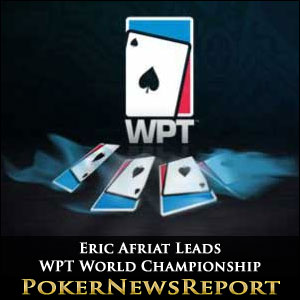 Eric Afriat has a substantial chip advantage over the remaining 67 players after Day 2 of the WPT World Championship, with only 36 due to cash in the event.

Eric Afriat – last week´s winner of the WPT Seminole Showdown – tore away from the rest of the field yesterday in the WPT World Championship, bagging up an impressive 1,003,000 chips to carry almost double the stack of his closest opponent Anthony Gregg (567,000 chips) forward into today´s Day 3.

Afriat flew under the radar for most of the day, as the focus was maintained on the battle for WPT Player of the Year (won by Mukul Pahuja after Shaun Suller bust out against Dan Wach), and some of the more identifiable names of the poker world.

Day 2 of the WPT World Champions started with 200 players still in contention for the $1,310,146 first prize and blinds of 600/1,200 (ante 100). Almost immediately the cards were not running well for many players, and Cliff Josephy was eliminated in one of the first hands of the day A♠ Q♣ > A♥ K♥ when his opponent – David Farah – spiked the Q♠ on the River.

Other players who got their chips in at the right time – but who came out second best in the hand – included Chris Moorman who was eliminated by Loni Harwood 10♦ 10♥ > A♥ K♠, and Andy Philachack whose pocket Kings lost out to an opponent´s flopped set of Jacks. Andy Kottler doubled up through Christian Harder K♥ K♠ > A♥ A♠ with a King on the flop, and Anthony Zinno was bust by Phil Hellmuth Q♣ 10♠ > K♠ Q♠ when Hellmuth paired his Ten on the flop and it held.

Hellmuth One of Many Big Names to Survive

Phil Hellmuth is one of a significant roll-call of players who made it through to Day 3 of the WPT World Championship. Scott Seiver moved menacingly into contention with the dual elimination of Bryn Kenney (A♦ 10♦) and Matt Glantz (3♦ 3♥) when his pocket Jacks held up late in the day, while Jeff Gross survived a scare on a three-heart flop to bust Chris Tryba A♣ A♠ > A♥ Q♣.

Byron Kaverman flopped a set of Kings against Robert Panitch to temporarily take the chip lead during Level 10, and closed the day with an above average stack (347,500 chips), as did Matt Stout (274,000 chips) – who bust out Christina Lindley during the last level of the day with pocket Aces > pocket Tens.

Loni Harwood also completed the day, but with a much reduced stack after losing 147,000 chips to Eric Afriat (A♥ 4♠ – flopped trip Fours), and the only other recorded hand of the chip leader came in Level 13, when Eric Afriat (A♣ A♠) called Harrison Gimbel´s (7♠ 6♠) shove for 280,000 chips on the flop of K♠ 10♠ 6♥ and managed to avoid all of Gimbel´s outs to move into a substantial chip lead.

Looking Ahead to Day 3 of the WPT World Championship

Day 3 of the WPT World Championship is when the thirty-six-player money bubble is expected to burst. Sixty-eight players will return to the Borgata Casino, Hotel and Spa where the blinds for Level 15 are 2,500/5,000 with a 500 chip ante. Play is anticipated to continue until just twenty-seven players remain en route to Saturday´s final table. Those in the prime position to feature in the climax of WPT Season XII include: