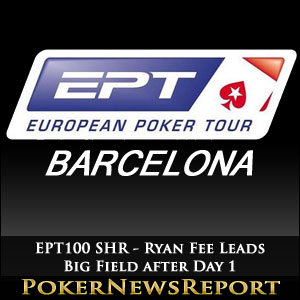 It has not been a bad year so far for Ryan Fee. The Californian won the WPT Bay 101 Shooting Stars High Rollers in March, quarter-finalled the Mix-Max Event at the WSOP (being knocked out by eventual winner Vanessa Selbst) and last month won the Bellagio Cup in Las Vegas.

Fee´s first excursion into Europe sees him lead the EPT Barcelona Super High Rollers after Day 1, but his achievements so far this year – as good as they are – fail to compare favourably with some of the players he has queuing up behind him.

The names among the 57 unique entries for the €50,000 buy-in tournament read like a “who´s-who” of European poker, with a few PokerStars pros thrown into the mix – Trickett, Schemion, Jacobsen, and Muehloecher are all there, plus Mercier, Negreanu and Vanessa Selbst.

Big One for One Drop winner Daniel Colman enjoyed a good opening day, as did Jean-Noel Thorel (who led the event for most of the day) and Mustapha Kanit – who sprung up the leaderboard late in the day with victory in a big pot which eliminated Fedor Holz.

Mike McDonald was bust in the last hand of the night (giving Ryan Fee his narrow chip lead), but McDonald and Holz have the opportunity to re-enter again before the start of play today – along with the handful of other players who bust from Day 1 of the tournament and failed to re-enter immediately.

Such is the leisurely format of the Super High Rollers event that players starting the tournament on Day 2 “from scratch” will have 50 Big Blinds to play with from their starting stacks of 250,000 chips. With the chip leader having less than four times the starting stack (after re-entering himself), the likelihood is that the total number of entries and re-entries will grow beyond the current 71.

Play on Day 2 is scheduled to continue until a final table of eight Super High Rollers remain.

As with many stops on the European Poker Tour, the series of EPT events is scheduled to coincide with an ongoing national or regional event, and the 2014 EPT Barcelona is being run alongside the PokerStars-sponsored Estrellas Poker Tour (“Estrellas” meaning “Stars” in Spanish).

The Estrellas Main Event has been a remarkable success, with more than 2,500 unique entries received over three opening flights (the biggest freeze-out event ever played outside the States). Leading the way into Day 2 is Swedish poker player Emma Wikberg, who found pocket Aces twice during the last level of play to take a substantial advantage into today´s action, but – like Ryan Fee – Emma Wikberg has a talented field queuing up behind her.