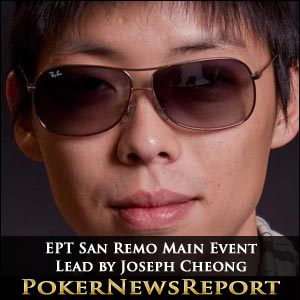 After two Day 1s, which saw first the Italians take hold of the tournament and then the Canadians (Vanessa Selbst is now Canadian according to the chip counts!), the American now heads up the international-feeling leaderboard after capturing two massive pots in the later hands of the day. The pack chasing Cheong includes fellow Canadian/Americans Chris McClung, Kevin MacPhee and Vanessa Selbst, and there is also a strong presence of UK poker players – hoping to take down this prestigious event for the third time on a row.

Joseph Cheong had started Day 3 of the EPT San Remo main Event in a fairly strong position ahead of the average chip stack, but took an early knock against Nick Yunis´ turned flush and went down to 31,000 within the first level. Building his stack up to 300,000 chips as the final level commenced, Joseph first battered Shaun Deeb and eliminated Piero Guido when his A♦ A♣ held up against Guido´s A♠ K♣ and Deeb´s folded hand, and was then dealt pocket Queens which held to dent Shaun Deeb´s aspirations of a first EPT cash since Poland in 2009.

After their success in the WSOPE, the success story continues for UK poker players. Both Jon Spinks and Barny Boatman enjoyed exceptional days – the Hendon Mobster recovering from 20,000 chips at one stage to end the day on 300,000 – with Jon Spinks getting off to a flying start when hitting a gutshot straight to cripple Petteri Vanhapelto who had caught a pair of Aces on the turn. Current EPT San Remo Champion, Rupert Elder had a flying start of a different variety – catching an early morning flight back from the UK after attending a friend´s wedding on Saturday. Sadly, Rupert was busted out in practically the last hand of the evening – running his Jacks into the Aces of Stefan Ianuszewicz.

A Mixed Day for the Ladies

Vanessa Selbst had another solid day – finishing in sixth after her suited connectors (4♣ 5♣) crippled Salman Behbehani (Q♦ Q♥) – as did compatriot Melanie Weisner who finished Day 2 with an above average chip stack following two good cashes at the EPT London and a deep run in the WSOPE Main Event. But it was not so good for top European lady players Sandra Naujoks, Irene Baroni and Erika Moutinho – who was desperately unlucky to have her A♦ J♦ cracked by the Kings of Shaun Deeb on a board of 3♦ J♥ 9♦ / 3♥ / 2♣. (Still we know what happened to him when he had to play against men!). Sadly, we also lost 2010 EPT San Remo champion, Liv Boeree, who overbet a short stack´s shove to try to isolate them, and herself got overbet by an opponent with a better hand – Damm strategy!

With the recent conclusion of the World Series of Poker in Cannes, a number of high-profile names made the short journey along the A10 and into Italy for the EPT San Remo. 837 players either paid the €4,900 buy-in or [geolink href=”https://www.pokernewsreport.com/pokerstars”]qualified online at PokerStars[/geolink] (including WSOPE Main Event winner Elio Fox – how did he do that if he´s American?) to create a prize pool in excess of €3.7 million ($5.12 million). By later on today, we will find out who the top 128 players will be assured of cashing in the event – one of whom will walk away on Wednesday night with the winner´s cheque of €800,000 ($1.108 million).

Ten nationalities are represented in the leading twelve players, with a smattering of PokerStars Pros, online qualifiers and an Italian Poker Tour Player of the Year also included. Chip leads are no guarantee of success (just asked Sergey Tikhonov, who entering the final level of the day had 200,000 chips more than anybody else), and play is expected to tighten up a little until seventeen more players are eliminated and we get in the money. When play resumes today, blinds will be 2,000/4,000 (ante 400) with the average chip stack 174,375.