Raul Mestre leads the EPT San Remo Main Event after a busy Day 3 on which the money bubble burst and the field was reduced from 113 players to just thirty-nine. 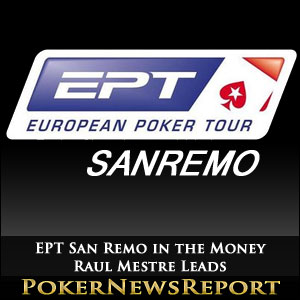 Raul Mestre leads the EPT San Remo Main Event after a busy Day 3 on which the money bubble burst and the field was reduced from 113 players to just thirty-nine.

The EPT San Remo Main Event is warming up nicely on its approach to Sunday´s final table, and there is plenty of potential for history to be made in this prestigious event as well as more than €2 million still to be distributed in prize money.

Raul Mestre – the current chip leader – could become the first Spaniard to win an EPT Main Event – a feat that none of his compatriots have managed in ten years of the European Poker Tour – while three players are still in with a chance of becoming the first player to win two EPT Main Events.

113 players returned to the Casino San Remo for Day 3 of the €4,900 buy-in EPT San Remo Main Event, knowing that only 79 of them would cash in the tournament. Lukas Berglund (700,600 chips) started the day as a massive chip leader after flopping sets for fun on Day 2, with Brazil’s Thiago Crema De Macedo (482,400 chips) and Raul Mestre (473,300 chips) leading the chasing pack.

It took less than two levels for the money bubble to burst, before which time we lost 2011 WSOP Champion Pius Heinz – whose Q♥ 9♦ was out-kicked by Stephen Chidwick (K♦ Q♣) on a Queen-high board – Aku Joentausta, who was eliminated when his pocket Aces were cracked by Olivier Busquet´s flopped set of Nines, and Paul Berende who got all-in with A♣ 9♣ against Mitch Johnson´s A♥ 6♣, and saw Johnson catch runner-runner Trip Sixes to send him to the rail.

Mark James is the Bubble Boy

Surprising few UK poker players made the trip to Italy to compete in the EPT San Remo, but one will be remembered for all the wrong reasons – Mark James. James moved all-in during hand-for-hand play with A♣ Q♥ and was called by Mitch Johnson who had 9♦ 9♠. The flop of K♥ 9♥ 4♦ could not have been crueller to James as Johnson flopped a set – which improved to a Full House on the 4♥ Turn. Mark James was eliminated in eightieth place and the remaining players were each assured of a €8,434 min-cash – Ace-Queen once again proving itself to be the most expensive hand in poker!

In the post-bubble melee, several players took advantage of the shove-or-fold strategy employed by the short-stacks. Michael Tureniec bust out Marcel Vonk when his pocket Aces improved to Quads, Olivier Busquet temporarily took the chip lead when his pocket Nines were too strong for Dmitry Urbanovich´s K♥ Q♠, until Raul Mestre delivered the knockout blow to Roberto Romanello´s EPT hopes when his 4♦ 9♥ flopped trip Nines against Romanello´s A♦ 10♦.

Michael Tureniec, Dimitar Danchev and Vicky Coren are the three remaining players remaining in the EPT San Remo who have previously won an EPT Main Event and who have the opportunity to become the first player to take down two titles. PokerStars Team Pro Vicky Coren is in the best position of the three to become a dual winner after bagging and tagging 455,000 chips at the close of play (Danchev 302,000 chips – Tureniec 213,000 chips).

Coren enjoyed a decent post-bubble spell in the last two levels – doubling up against Ariel Celestino 9♥ 9♦ > K♣ K♠ (the chips went in after Coren had flopped a set of Nines), doubling up again against Dan Murariu´s pocket Kings with A♠ Q♣ (which sometimes win) and rivering an Ace-High flush to take chips from Raul Mestre. Had it not been for doubling up Tom Alner before the close of play (A♣ Q♠ > A♥ K♠), Vicky Coren would likely have featured quite high up in the overnight chip counts (below).

Day 4 of the EPT Main Event promises to be quite a short affair. With just thirty-nine players remaining – and the day scheduled to conclude when just eighteen are left – it is likely that no more than three or four 90 minute levels will get played today.

When the thirty-nine remaining players take their seats at the Casino San Remo, they will be entering Level 20 (blinds 5,000/10,000 – ante 1,000) with eight players having less than twenty big blinds in front of them. Piotr Shautsou (139,000 chips), Pawel Brzeski (116,000 chips) and Igor Nekazakov (80,000 chips) are the players most at risk, while those we expect to still be involved in the action on Saturday include: