At the end of Day 1A Gianluca Trebbi leads a 1-2-3-4 of Italian players in the EPT San Remo with some big names already packing their bags and going home. 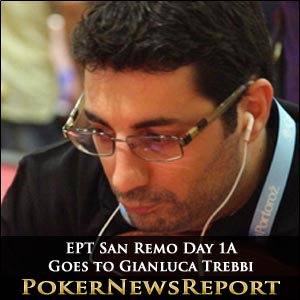 The Season 8 San Remo leg of the PokerStars sponsored European Poker Tour was brought forward from next spring to accommodate the huge number of international poker players who earlier this week were just an hour and a half´s drive away in Cannes for the WSOPE.

However, at the end of Day 1A, local player Gianluca Trebbi leads a 1-2-3-4 of Italian players with some big names already packing their bags and going home.

The EPT San Remo Main Event has always been a well-attended tournament, and this year organisers are hoping for another bumper field. 1,240 players paid the €5,300 buy-in (or qualified online) in 2010, when Liv Boeree collected €1.25 million for her biggest ever victory, and 987 players failed to stop a UK poker player from winning the event earlier this year when Rupert Elder brought another €930,000 home across the channel. The EPT San Remo also has happy memories for one Mr Jason Mercier. It was his first live poker cash anywhere in the world when he won the inaugural event in 2008.

Mercier One of the First to Depart

There was going to be no repeat performance from Jason Mercier, who ran his pocket Eights into an opponent´s Nines, and we lost another EPT winner when David Vamplew twice ran AK into big pairs and came second. Around the same time as Mercier´s departure, Arnaud Mattern – who finished 10th in the WSOPE Main Event – ran his pocket Threes into Rupert Elder´s AK, which connected on the turn, and we eventually got rid of Daniel “D-Negs” Negreanu (J♥ 9♦) when he ran the last of his chips into the Q♥ Q♦ of compatriot Tyler Bonkowski. Negreanu actually made a straight on the turn, but it was no match for Bonkowski´s quad Queens.

As well as Bonkowski´s good start to the EPT San Remo Main Event, Canadian´s Kevin MacPhee and Andrew Chen also enjoyed a successful Day 1A (Negreanu doesn´t count as Canadian because he was only living there for three weeks between leaving Vegas and going to the UK for EPT London), and April´s third place finisher Xuan Liu is also up amongst the leaders after taking a huge slice out of UK poker player Jon Spinks´ chip stack.

Gianluca Trebbi´s rise up the leader board started early in the day, when busting Chris Brammer in the space of two hands. In the first, Brammer ran his pocket Queens into Trebbi´s Aces, and immediately afterwards committed the rest of his chips with pocket sevens – only to find that Trebbi was holding a pair of Queens. Gianluca Trebbi was also responsible for the elimination of November Niner Phil Collins (who has not cashed in any of the European Events he has contested) and finished the day just one big blind ahead of fellow Italian Massimiliano Forte with 159,600 chips.