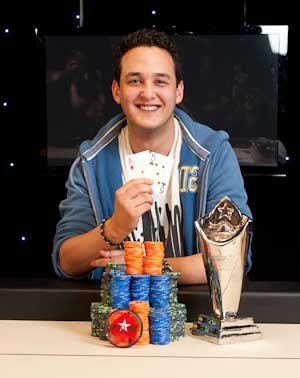 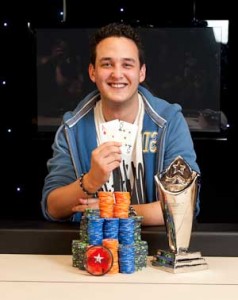 It is a truth universally acknowledged that British poker players have better toned arms than other nations – mainly because they’re tired from lifting EPT trophies so much. This season Toby Lewis, David Vamplew and Roberto Romanello have all had the glory of holding the hardware aloft. And now Britain can claim her fourth champion in 24 year old Rupert Elder, who won the European Poker Tour San Remo this week. The trophy even remains in British hands, as last year it was won by the beautiful Liv Boeree.

Elder beat a field of 987 players in order to take a bank bursting € 930,000 prize, along with a ticket to the EPT Grand Final  which takes place in Madrid next week. He also took the official Shamballa Jewels European Poker Tour winner’s bracelet; a much coveted item on the pro circuit.

The first player to fall from Tuesday’s final table (of which the Italians made up around half) was Roberto Spada. The former chip leader, who had only seven big blinds left by this point, pushed all in with K♦ 3♣. He was called by Max Lykov who held A♥ 9♦. The board came down 10♦ 4♠ 7♠ J♠ 8♠; giving Lykov a straight and sending Spada to the rails €81,950 richer for eighth place.

Next to fall was Costantino Russo. Russo pushed all in with pocket 9s, but failed to hold ground against Xuan Liu and her A♦ Q♣. With the flop producing another Ace and no 9s appearing on the turn or river cards, Russo left the table in seventh position with € 125,000.

Not long after was Milan’s Massimiliano Manigrasso, who made a confidant raise and then a re-raise with with Q♣ Q♦ to Rupert Elder. However, Elder was sitting pretty on K♠ K♣ and made the call. A board of 2♥ 7♦ 7♥ J♠ 7♣ could do nothing for Manigrasso, and so he had to be content with sixth place and €170,000.

Two hands later and Francesco De Vivo called all in on the big blind with Q♠ 9♥, only to be called by Xuan Liu on the small blind and her J♥ 4♦. A single 4 on the flop was all Liu needed to take the hand and send De Vivo home in fifth place with €220,000. Left were Russian Max Lykov, Canadian poker player Xuan Liu, German Max Heinzelmann and Brit Rupert Elder.

Russia’s hopes for victory were dashed next with the departure of Max Lykov. Following a raise by Max Heinzelmann and a re-raise by Xuan Liu, Lykov cold four-bet from the big blind position. Liu called with pocket 10s, against Lykov’s pocket Kings. However with a 10 appearing on the turn, the hand was Liu’s, and she sent the previous EPT winner to the rails in fourth position for €290,000.

This victory put Liu as chip leader, but her success was to be short lived. She was forced to fold after a five-bet from Rupert Elder, recovering only a little when she won a rivered flush against Max Heinzelmann. Being forced to fold again after a shove from Elder, followed by a muck to Heinzelmann and his pocket Queens, meant she was short stacked and down to only 16 big blinds. She pushed in the last of her stack with A♥ J♥, and was promptly called by Elder and his A♣ 7♥. Liu looked in excellent position to get back into the running, but with the board coming down 4♥ 5♥ 7♦ 10♠ 6♠ it was thoroughly in Elder’s favour. Liu exited in third place with € 360,000; the biggest live cash of her career so far.

Entering the heads up phase it was Britain against Germany, with Rupert Elder facing off against Max Heinzelmann. After exchanging chip lead a few times, Elder gained the high ground; holding 26 million to Heinzelmann’s 3.4 million. Before long Heinzelmann shoved from the button with Q♦ 5♠, only to find himself outdone by Elder’s A♦ 5♣. The board ran blank with 3♠ 2♣ 7♣ 10♥ K♠ and Heinzelmann took runner-up position with €600,000. Rupert Elder held the trophy aloft in a proud victory for Britain, flying home with the comforting weight of €930,000 lining his pockets.

The EPT San Remo trophy therefore stays in British hands. At least for another twelve months.