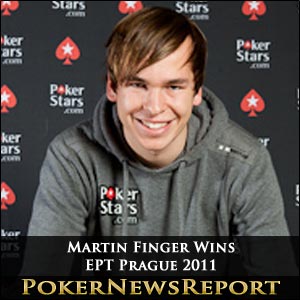 Seeing off 721 other players, the 21-year-old PokerStars qualifier picked up the €720,000 first prize, a trophy and a striking Shamballa Jewels bracelet worth over €10,000 after agreeing a deal with Dutchman David Boyaciyan once play had become one-on-one in the €5,300 buy-in event at the Hilton Prague Hotel.

With Levi now eliminated, an incredible hand developed early in the Finger-Boyaciyan clash.

The Dutchman had a large proportion of his stack in ahead of the 10♥ 10♦ 5♣ flop, and the remainder followed – only for both to show pocket aces. Astounding, if something of an anti-climax.

But Finger moved even further clear of Boyaciyan soon after to stand at more than 17 million chips against his opponent’s four million-plus.

The Dutchman wasn’t done yet, though, and fought back strongly to take the heads-up battle beyond two more 60-minute levels.

However, Finger – whose previous best result was second for $60,508 at August’s EPT Barcelona in the €1,000 No-Limit Hold’em event – eventually prevailed after Boyaciyan, when holding 10♠ 10♥, committed his remaining chips of about five million pre-flop to take on Finger’s A♥ K♠.

The K♦ K♥ 6♥ flop gave Finger trips to put the German just two cards away from EPT glory, and the Q♣ turn and 9♦ on the river settled it as Boyaciyan failed to improve.

Day 5 of the event held in the Golden Prague Poker Room was thrilling, even though Finger – who had ended the fourth day on top of the leaderboard – was always either first or second in chip counts.

The German held 5.8 million once the event became eight-handed for the final table, just ahead of the London-based Levi, who held a handy 5,690,000 chips.

Finger left it late on Day 4 to move atop the leaderboard, though, winning one of the last hands of the day against Day 3 chip leader Patrick Renkers, of the Netherlands.

The final day started out quickly, with Boyaciyan getting all his chips into a pot against Levi after seeing a flop of K♣ 7♠ 10♣.

Levi, holding 10♥ 7♥, had the top two pair, but was unfortunate to see his Dutch rival pick up trip kings from his hole cards of K♦ K♠.

The turn and river changed nothing and Levi was swiftly down to about two million as Boyaciyan took over as chip leader on over 7.6 million.

Dynamic Dane Wissing had struggled to battle back from being the short stack, so – when the opportunity arose – he open-shoved all-in from late position inside the first 60 minutes, but then saw Spaniard Usero re-raise to take out the remainder of the table.

Unfortunately, for Wissing, he only held 7♣ 4♦, while Usero had pocket eights. The board read K♠ A♥ Q♠ 7♣ 6♥, and that was it for the Dane, who was hitting the rail in eighth place.

The second German at the final table, Wiese, was next out when his 5♦ 5♣ could not hold against Finger’s A♣ 3♣ when the flop provided the latter with an ace.

Sixth place went to New Yorker Engel when his hole cards of A♠ 6♠ were beaten out by Finger’s A♦ J♥.

That successful pot took Finger back to the top of the final table chip counts with a little over 8,200,000, although Boyaciyan was still right in touch with just over eight million, while third placed Usero was way back on approximately 2,600,000, and Levi and Drobyna held just over one million each.

The five final table survivors took a break at the point before returning for more action with the blinds now at 40,000 and 80,000.

The Germany-based Drobyna was soon out in fifth place, however, when losing a hand to Boyaciyan.

The K♥ 9♠ 5♦ flop paired Boyaciyan’s king, while the J♥ turn and 8♥ river changed nothing and Drobyna was quickly packing up his belongings.

Chip leader Finger was the first competitor to break through the 10 million barrier following successes in a few pots, including some against the rampant Boyaciyan.

The German was storming through this final table, though, and eliminated Usero in fourth place after the Spaniard had open-pushed for approximately 1,400,000 when holding A♥ 8♦.

He was, however, called by Finger, who showed K♥ K♠. The 2♥ J♥ 4♥ flop gave Usero a flush draw that would take the pot, only for the 8♣ turn and 10d river to dash his hopes of glory – and that result sent the Spaniard out in fourth.

Finger’s domination continued when short stack Levi decided, unsuccessfully, to take on the German during level 30 with the blinds now up to 50,000 and 100,000.

Paris-based Levi, on the button, open-raised with his 8♦ 6♦ to place all his 1.5 million chips into the middle and was swiftly called by small blind Finger.

Levi needed a miracle flop to defeat the A♣ J♦ of Finger – and was handed a lifeline when the flop showed 8♣ 4♣ 3♣ to give him a pair of eights.

However, with three clubs on board, Levi had to avoid jacks and aces, as well as clubs, of course.

Regrettably, for Levi, the A♥ arrived on the turn and then came the J♠ on the river to give the German two pair and send the Frenchman out in third place.

Heads-up play started with Finger well in command on 15,250,000 chips, while Boyaciyan held 6,410,000, although the German did agree to a deal before finishing off the Frenchman in what was a lengthy battle that took in two additional levels of one hour each.

The tournament leaders were becoming well established now as Renkers continued to lead the way when moving over 3,200,000, with Finger, Levi and Engel his closest rivals – all of who had chip stacks above two million.

Now down to just 18 players, a spectacular hand developed between Levi and Estonia’s Mauri Dorbek.

Levi shoved all-in on a J♣ 10♦ Q♠ Q♣ J♠ board and Dorbek thought for some time before committing the remainder of his 700,000-plus stack.

The next three players out were PokerStars qualifier Michael Smrckova, of the Czech Republic, who took home €20,000 for 17th place, his countryman Vojtech Ruzicka (16th place for €20,000), and young English star Chris Moorman (15th for €23,000).

Short stack Moorman, of Brighton, threw in his remaining chips when holding K♥ Q♥, to be faced by the pocket sixes – which held – of Frenchman Yann Brosolo.

The last Team PokerStars Pro, Irishman Jude Ainsworth, hit the rail in 14th place for €27,000 when losing a hand to Renkers, while Sweden’s Pontus Khosravi joined him – also with €27,000 in winnings – soon after when his A♥ K♦ failed to stay in front against the Q♥ J♥ of PokerStars qualifier Kimon Lehmann.

Eleventh spot went to Brosolo when Wissing eliminated the Frenchman for €35,000, while Levi’s flush then ousted Romanian PokerStars qualifier Ignat Liviu in 10th for €48,000.

Renkers, who still had about 2,500,000 chips, was out in ninth after becoming involved in a pre-flop raising battle with Finger that saw the creation of a huge pot of over five million.

Renkers was all-in with his Q♠ Q♥, while Finger just had a few chips remaining as he showed A♥ K♥.

The 2♥ 9♣ A♦ J♦ A♠ board gave the German trip aces, as well as the chip lead, and that was Renkers gone and the final table set for what would be an action-packed Day 5.