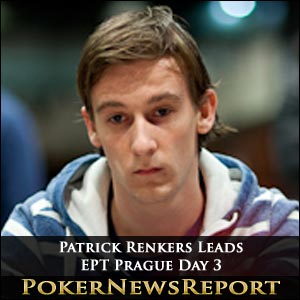 His nearest rival is PokerStars qualifier Martin Finger, of Germany, who started Day 3 in exactly the same position but now finds himself with just over half the chips of leader Renkers with 1,289,000.

While many players enjoyed good days, no-one could quite match Amersfoort’s Renkers.

The Dutchman then eliminated American Joe Serock in 47th place for €13,000, before getting the better of Dennis Bejedal in the event’s biggest pot.

The Swede, with his pocket queens, flopped middle set, only for Renkers to call Bejedal’s check-raise and land a gunshot Broadway straight from the turn card.

The Dutch star again checked and Bejedal popped in 285,000. Renkers checked his chip stack and then went all-in, much to the surprise of many spectators and most likely Bejedal.

Bejedal had to make it 732,000 and reluctantly made the call to put Renkers’ tournament life at risk.

However, Renkers showed K♥ J♥ for the nuts, leaving Bejedal – who claimed he had flopped trip queens – to muck his cards in frustration as he was chopped back to approximately 340,000.

Renkers had about 1,800,000 then and continued his meteoric rise until the close of the day’s play.

Early eliminations on Day 3 included Team PokerStars Pro Johnny Lodden, Dominik Nitsche, David Peters, Narendra Banwari and Ramez Haddad – and they left with nothing as the money bubble had not been reached by then.

As was expected, play slowed down somewhat as the players approached the money bubble, with the top 104 paid out.

In fact, by the time play had become hand-for-hand, it took almost a complete level to find the unfortunate player to exit the tournament in 105th place.

But, of course, that stage was reached – and it was Norway’s Mads Amot who hit the rail without cashing.

With the vast majority of players on a break, Amot, on the button, raised to 9,000 in what initially appeared to be just another hand.

However, Englishman Eli Heath, in the small blind, raised that to 23,500, with all other players folding until the action came back to Amot, who gave his decision some thought before moving all-in for approximately 111,000.

Banbury’s Heath asked: “How much, please?” Then, after being told the amount, he added: “I call.”

The dealer appeared just as excited as the players, gleefully saying: “All-in and a call on table seven.”

However, he had to turn the cards over again because another hand was in progress at different table.

But, when that hand was completed, Amot revealed K♣ J♠ and Heath showed A♦ Q♣ for the British pro to be ahead.

Tournament director Thomas Lamatsch was now on the scene and announced the hand to a nearly-deserted room, before a board of 10♦ 3♥ 3♠ 6♣ 2♠ ended the hand and sent Amot home without cashing, although he did show some class by shaking Heath’s hand before exiting.

But it was American PokerStars qualifier Zachary Korik to first pick up any cash, €7,500, as the normal frenzied flurry of post-money bubble shoves and double-ups arrived.

Russian Sergey Baburin had opened with 10,000, before Korik shoved in 87,000. Baburin called to show 7h-7c, while Korik revealed 6s-6d. There was no help on the board for the American and he was out in 104th, to be closely followed by Spaniard Jesus Cortes.

Team PokerStars Pros Dag Palovic and Liv Boeree had been doing OK on Day 3, but they, too, were soon eliminated – and almost at the same time.

But it was 2010 EPT San Remo champ Boeree who exited first after calling a five-bet shove while holding A♠ K♣ against Day 2 chip leader Garri Tevosov’s 10♣ 10♦.

Slovakia’s Palovic also lost a coinflip a few minutes later on the river when his 9♣ 9♥ failed to overcome PokerStars qualifier Sharon Volfer’s A♦ 10♦.

Palovic, in the small blind, three-bet all-in over the top of Volfer’s button raise. The Israeli player called and the board showed 3♠ 2♦ J♥ 4♣ A♥ to give Volfer top pair and eliminate Palovic in 74th place, also for €9,000.

With Boeree and Palovic out, just Juan Manuel Pastor and Ainsworth of the Team PokerStars Pros were still in contention. Both players survived the day, though, with Ainsworth in ninth place and Spaniard Pastor in 13th on 742,000 chips.

As the bust-outs kept coming, others, of course, increased their chips stacks, including Mike ‘Timex’ McDonald.

Starting Day 3 just below 150,000, the American added to his stack by eliminating Max Silver midway through the day.

England’s Silver did not hold too many chips when going all-in with A♥ 6♥, to be met by McDonald’s A♦ Q♦. The American made a flush on the river and Silver was gone in 99th for €7,500.

McDonald – who won the second Epic Poker League main event this year – suffered a setback soon after, but later doubled-up after his pocket nines became trips on the river to defeat the pocket jacks of Nicolas Leger.

Thereafter, McDonald continued to move up the rankings and even twice saw off Petr Jaros – both times with pocket aces – to sit on 740,000 and in 14th place as the only former EPT winner, from Dortmund in 2008, still in with a chance of becoming the tour’s inaugural double winner.

Another well known player to make Day 4 is Englishman Chris Moorman, who sits don in 18th place on 557,000.