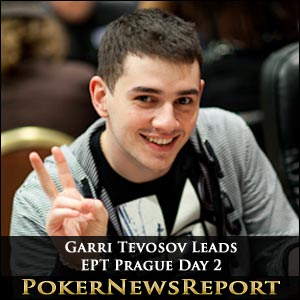 The PokerStars Russian Poker Series (RPS) Kiev champion will be aiming to emulate countryman Andrey Pateychuk – who left Prague with $630,263 after taking down the World Poker Tour (WPT) main event – and leads the way in the €5,300 buy-in EPT main event on 764,000 chips, with German PokerStars qualifier Martin Finger some way behind in second place on 612,600.

The top five is completed by Danish player Mads Wissing (565,200), Spanish PokerStars player Guillem Cavaller (557,800) and American PokerStars qualifier Calvin Anderson (414,900) after the returning 407 entries were cut don to 136 through six levels of play at the Hilton Prague Hotel.

Some of the game’s biggest names failed to make it past Day 2, however, with players such as Team PokerStars Pros Lex Veldhuis, Rino Mathis, Eugene Katchalov and Bertrand ‘ElkY’ Grospellier all hitting the rail before the close of play on Day 2.

Las Vegas-based Dutchman Veldhuis made probably the most dramatic exit when losing out in a hand to Polish player Artur Wasek during level 12 when the blinds were at 800 and 1,600 with 200 antes.

With Veldhuis in the cut-off position, the action folded to him and he made a raise of 3,500.

However, small blind Marian Murcek re-raised to 8,300, and big blind Wasek snap-called before the action returned to Veldhuis, who went over the top with his all-in bet of 62,300.

Slovakian Murcek quickly folded, but Wasek – after some considerable musings and more than a little prompting from his opponent over how it would be “only 10 more (blue 5,000) chips” – eventually made the call as more than half his stack went into the pot.

Veldhuis was in charge, though, with his A♣ Q♥ up against the Q♦ J♦ of Wasek. The Dutch player stayed in control on a flop that showed 6♠ 5♥ 3♠ flop, and little changed when the Q♣ arrived on the turn.

However, the river was the J♥ and that gave Wasek – Poland’s second biggest money winner of all time – two pair and eliminated Veldhuis.

The American was eliminated by chip leader Tevosov in a massive match-up of kings versus queens.

MacPhee, the 2010 EPT Germany main event winner, was well in charge with his pocket K♣ K♠ as all the chips hit the felt pre-flop in a pot that hit about 500,000.

Tevosov held Q♣ Q♦ and all seemed fine for MacPhee on a flop of 5♣ 4♣ 3♦, until the Q♠ arrived on the turn to give the former trips. The 9♥ on the river was a nothing card and MacPhee was out.