Andrey Saenko made it two successive days with Russian chip leaders after Day 1b of the European Poker Tour (EPT) Prague main event come to a close. 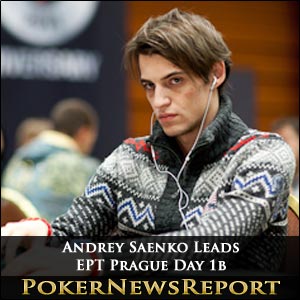 Andrey Saenko made it two successive days with Russian chip leaders after Day 1b of the European Poker Tour (EPT) Prague main event come to a close in the Czech Republic’s capital city.

Andrey Saenko ended Day 1b on 200,800 chips, following on from Day 1a being topped by fellow Vedzizhev Beslan. However, Beslan is now down in ninth place overall after the two opening flights on 132,200.

In fact, after another eight levels of play at the €5,300 buy-in PokerStars EPT main event, just two players from Day 1a remain in the top 10, with Spaniard Jesus Cortes down in 10th on 131,200.

Yet another Russian, Andrey Pateychuk, struggled throughout Day 1b after securing the World Poker Tour (WPT) main event in Prague on Monday for $630,263, but will be back today after bagging up just 14,600 to sit down in 255th for the second session.

An impressively large field assembled for the fifth EPT visit to Prague as 488 players registered for Day 1b to take the total to a record-breaking 722 when added to Day 1a’s 234 starters.

Last year’s event drew 563 starters to the Hilton Prague Hotel, so this week’s starting line-up has shown a massive 28% increase in numbers sitting down at the felt.

Saenko, meanwhile, heads the leaderboard after 274 players made it through Day 1b to take the Day 2 total to 407 when added to Monday’s 133 survivors.

Ukrainian Denys Drobyna will start Day 2 in sixth place on 145,600, while seventh-placed Italian Danilo Donnini holds 142,600, Sweden’s William Thorson (133,400) is in eighth, and Beslan and Cortes fill out the final two top 10 spots.

Saenko has made a great start to the event as he attempts to improve on his record of six live tournament cash finishes, particularly as five of those were achieved in his home nation of Russia.

He managed a minor Russian Poker Tour (RPT) victory for $5,885 when winning the $400 No-Limit Hold’em Knockout event in Kiev back in October of last year, although his best pay day arrived the previous month – again in Kiev – when he finished second for $41,600 at the $820 Grand Event.

Like many of his countryman, however, Saenko’s main goal is to collect a World Series of Poker (WSOP) bracelet, although his best finish in Las Vegas is $30,974 for coming in 373rd at this summer’s main event.

Further down the leaderboard sees several Team PokerStars Pros, with the likes of Martin Hruby, of the Czech Republic, enjoying a quiet day to finish on 20,100 chips and in 239th place from the second string.

Slovakian Dag Palovic may have been unrecognisable, though, as he lost a proposition bet with fellow Team PokerStars Pro Hruby and therefore had to turn up for Day 1b dressed in a blonde wig, black gloves and black dress!

However, Palovic still gave a good performance to finish the day on 73,200 and in 60th place.

Lebanese player Ramez Haddad was among the first group of players to make it above 100,000 chips but dropped back a little to end the day 28th on 98,900, while former EPT champ Anton Wigg, of Sweden, battled away to finish on 104,400 in 23rd place.

However, others were not so fortunate, and those hitting the rail early included 2011 WSOP main event winner Pius Heinz.

About halfway through Day 1b, Heinz was left crippled in a three-way pot after his pocket tens were met by Dominik Nitsche’s jacks. The German was very short thereafter and was exiting the event fairly quickly.

Top 10 overall placings and chip counts after Day 1b of the EPT Prague main event: