The PokerStars sponsored European Poker Tour comes to London, with a bumper package of events extending over 8 days and hosted in two prime London poker venues. 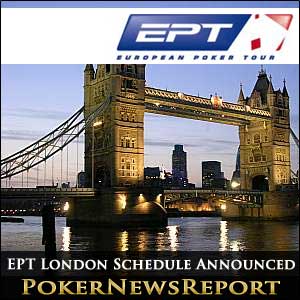 A staggering 31 tournaments are scheduled to coincide with the climax of the UK and Ireland Poker Tour and the London Poker Festival, and offer a mouth-watering feast of poker which will no doubt tempt a huge array of domestic and international poker stars.

The Finest Live Poker Event in the UK

History will show that the EPT London is one of the finest live poker events to take place in the UK. It broke the record in 2010 for the biggest single-entry to a live poker event in the UK when 848 players entered the Main Event and, as 168 of them had qualified through PokerStars´ online qualifiers, it also made it the most accessible. The feature tournament was won by Scottish poker player David Vamplew, who collected a first prize of £900,000 out a total prize pool in excess of £4 million.

In addition to the Main Event, Hi-Rollers tournament and a special game hosted for ladies only, PokerStars have introduced several innovative variations on existing games to prevent the Tour becoming tired. A new five card Pot Limit Omaha Hi/Lo is scheduled into the series, as is a “Win the Button!” event  – where the winner of each hand gets to be on the button for the next – and a No Limit Hold´em “Rivers” game in which each player still in the pot is dealt their own river card.

Two venues are being used to host the EPT London – the Hilton Metropole Hotel and the Grosvenor Victoria Casino – both located on the Edgware Road just up from Marble Arch and London´s West End. The buy-ins shown below include the tournament fee and bounty where applicable (bounty amount also shown in brackets in event description), but please note that times are subject to change in the event of a previous tournament overrunning.