The Austrian pro Maximilian Senft accumulates 223,000 chips to emerge as an early favorite after Day 1B of the EPT London Main event. 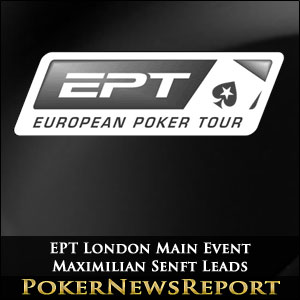 The Austrian pro Maximilian Senft accumulates 223,000 chips to emerge as an early favorite after Day 1B of the EPT London Main event.

In tournament poker, the first few levels of play are generally known as a feeling out period. Most players spend the majority of these relatively insignificant levels figuring out their opponents styles and trying to pick up tells so that when the blinds and antes do become significant they can force them into making bad decisions.

And then there are those who waste no time getting involved in monster pots. Maximilian Senft would fall into the latter category. During level one of the EPT London Main Event, Senft would open on the hijack with A♠K♥. The player in the cutoff three-bet and Yann Dion would cold four-bet to 1,800 on the button. The fearless Senft would click it back for 4,400, and to his surprise Yann would throw in a nearly unprecedented six-bet to 7,100.

After going into the tank, Senft would make what most would view as a horrific call out of position. But he would be the beneficiary of a dream K♣K♠8♠ flop. The flop was checked through, and the turn came the Q♠ giving Senft the nut flush draw to go with his nut trips. Senft made a probing bet of 4,000 that was called by Dion, who was holding A♠A♦ and at this point was only beating a bluff. The river came the 8♦, filling Dion up. After a short delay, Senft jammed. A suspicious Dion would make the call. Maximilian would never look back, running his starting stack up to 223k by day’s end.

PokerStars Pros Bertrand “ElkY” Grospellier, Jason Mercier and UKIPT high roller winner Vanessa Selbst were also eliminated in short order. In total eight PokerStars representatives would not be returning for Day 2 action. In total, 230 players remained out of the starting pack of 389. They will join the 105 remaining Day 1a players on Day 2.

Notables who did make it through Day 1b included Barry Greenstein, Liv Boeree, Daniel Negreanu and Dario Minieri. Rounding out the field of recognizable pros is 13-time bracelet winner Phil Hellmuth, although he barely managed to hang onto a third of his starting stack.

Registration will still be open when the gates open at noon. Several players are expected to enter.