The winner of a massive late-day coin flip, Tudor Purice races his way to the top of the leaderboard in the EPT10 London Main Event. 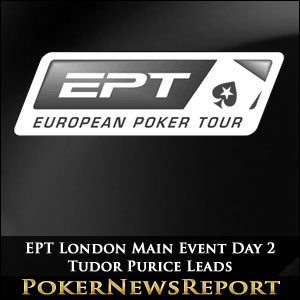 The winner of a massive late-day coin flip, Tudor Purice races his way to the top of the leaderboard in the EPT10 London Main Event.

Day 2 of the EPT10 London concluded today in grand fashion. After accumulating a healthy stack when his wheel beat Mike McDonald’s pair of Aces, Tudor Purice would vault into the chip lead by winning the most classic of classic races.

On the last level of the day, Purice would run A♥K♠ into Onur Guvan’s Q♦Q♥. The action was hot and heavy pre-flop, and before the dealer could flip over a single card, the two were all in. Purice would spike a king on the flop, and hold up to win the massive 275k chip pot. He would end the day with 628,200 chips, good for a more than 50k chip lead.

The top ten chip counts heading into Day 3 are:

Of the leaders, Mark Newhouse is perhaps the most recognizable name. A current November Niner, Newhouse will begin the WSOP final table eighth in chips with 7,350,000. He boasts over $2 million in career live tournament earnings.

Other notables that would survive the fast and furious Day 2 would be Dan Smith, Shannon Shorr, Paul Volpe, Day 1 overall chip leader Dhru Patel, Barry Greenstein and Theo Jorgensen. Patel would be the victim of a sick three-way cooler, when his K♣K♥ would run into Mat Frankland’s A♦A♥. Andoni Larrabe was also all-in preflop holding Q♠Q♦. The board ran out low, Larrabe was eliminated and Frankland would more than double up.

But at the end of the day all eyes were on the new chip leader. Purice is a relatively unknown entity in the poker world. His largest recent cash was in last year’s EPT Main Event at Prague, good for $13,071. Before that he placed second in a side event in 2011, also at EPT Prague. His runner-up finish was worth $16,737. Should he hold on, Purice will trump his largest to date cashes by a hefty margin.

The bubble is expected to burst tomorrow, as the returning players are only 20 spots away from making the money. 87 players will receive at least £9,080 for their efforts, with the eventual winner taking home £560,980 of the £2,929,400 prize pool.

Day 3 will be begin at noon. Stay tuned for continuing coverage of this prestigious event.