With Season 10 of the European Poker Tour well underway in Barcelona, the highest achievers in Season 9 were honoured at a stupendous PokerStars party. 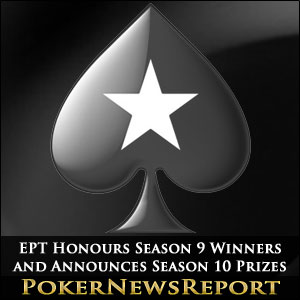 With Season 10 of the European Poker Tour well underway in Barcelona, the highest achievers in Season 9 were honoured at a stupendous PokerStars party.

Barcelona´s popular Opium Club was the setting for the PokerStars/EPT Welcome Party, and it provided a fantastic opportunity to reward the players who were the most successful throughout Season 9 of the European Tour.

Awards were made in seven different categories based on players´ (and countries) finishing positions in recognised EPT Side and Main Events (i.e. not qualifiers or invitational/ladies-only events), and although many of the categories were wrapped early in the Season, some went right down to the wire.

EPT Player of the Year

Slovakia´s Jan Bendik had his name on the EPT Player of the Year award well before the EPT Grand Final in Monaco earlier this year after three EPT Main Event cashes, three side event wins and a further six side event cashes. Then he rubbed salt into the wounds of the chasing pack by winning the Monaco €1,000 Turbo event and final tabling the €2,000 NL Hold´em tournament to run away with the title.

Online Qualifier of the Year

The award for Online Qualifier of the Year was judged on how players had performed at live EPT Events, rather than the number of times they won seats through qualifiers. Lithuania´s Anaras Alekberovas was therefore the winner after having cashed in Main Events in Barcelona (4th), Deauville (37th) and Berlin (32nd) for a combined total of €339,000 (and a few air miles as well!).

The five other awards went to:-

The awards ceremony coincided with the announcement of the prizes available for Season 10´s Player of the Year – which has just started in Barcelona – and which will this year be run in conjunction with the Global Poker Index. The winner of this season’s award will win €50,000 in Main Event buy-ins to be used in any live PokerStars or Full Tilt sponsored event, plus the prestigious trophy.

In addition to being awarded points in recognised EPT Events, players will also be able to gain points in any PokerStars or Full Tilt sponsored live poker series which coincide with an EPT Tour stop – for example, the Estrellas Tour, the Eureka Tour, the Italian Poker Tour and the UK and Ireland Poker Tour (UKIPT).