EPT Deauville champion Vadzim Kursevich is On Top of the World

Belarusian Vadzim Kursevich is enjoying “the best feeling in the world” after pocketing €875,000 for winning the PokerStars European Poker Tour (EPT) Deauville €5,300 buy-in main event at the French resort by outlasting 888 other competitors. 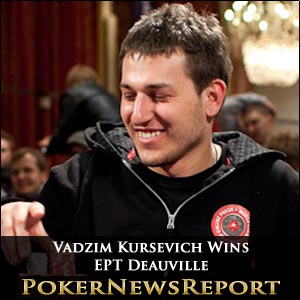 Belarusian Vadzim Kursevich is enjoying “the best feeling in the world” after pocketing €875,000 for winning the PokerStars European Poker Tour (EPT) Deauville €5,300 buy-in main event at the French resort by outlasting 888 other competitors.

Kursevich was thrilled by his victory, saying that he couldn’t “really believe it” as it was “like a dream” to lift the title and his biggest cash by easily surpassing the €300,000 he picked up for finishing third at the €5,000 buy-in No-Limit Hold’em main event of EPT Berlin back in April last year.

Seventh place and €110,000 went to Team PokerStars Pro Luca Pagano, of Italy, while Irishman Mick Graydon collected €67,200 for his eighth-placed finish, and Russian Sergey Baburin and French player and PokerStars qualifier Etienne Moudarres each left with €50,000 after exiting in ninth and 10th respectively.

The EPT has been in Australia and Paradise Island recently, but it was 24-year-old Kursevich who enjoyed the tour’s return to Europe with victory in Deauville.

However, Guichard showed great determination to battle back into contention after dragging himself alongside the Belarus pro – only for the Frenchman to lose out when their stacks were almost equal and blinds were set at 125,000 and 250,000, with a 30,000 ante.

That card certainly didn’t slow Guichard down as he tossed 1,325,000 chips into the pot, but would have been happy to see Kursevich – after some thought – move all-in.

Guichard called immediately to show 5♥ 5♠ for trips, while Kursevich – although the underdog – still had flush and straight out possibilities with his 6♥ 3♥.

Of course, the 8♣ arrived on the river to hand Kursevich a nine-high straight and the title.

The eight-handed final table started with Kursevich second in chips as the Belarus pro ‘enjoyed’ a rollercoaster ride that ultimately ended with his triumph.

Mick Graydon Out in Eighth Place

Dubliner Graydon, who had started the final table as the short stack, was the first to hit the rail in eighth place after about 120 minutes’ play when he moved all-in while holding A♣ 9♥ against the A♦ K♣ of chip leader Guichard.

Seventh place went to Team PokerStars Pro Pagano, who had struggled to make any inroads on the chip leaders, when his three-bet all-in move with A♣ J♠ was called by original raiser, Paris computer science student Than Trong.

The Frenchman showed 9♠ 9♥ to be ahead and his pair held on a board of Q♦ Q♥ 6♣ 10♥ 7♣ to leave Pagano disappointed as he once again failed to win from his seventh EPT final table appearance, although he did record his 20th cash.

Nearly 210 minutes passed before we had out sixth-placed finisher in yet another home player, Rogez.

Strangely, big blind Rogez waited until his original stack of 14 big blinds had collapsed to under two before calling all-in with J♥ 3♣ against Guichard on a flop of 9♦ 8♥ 6♣ flop.

Guichard was way ahead with his pocket cards of K♥ K♣, and that high pair stayed in control as the 3♦ turn and 7♥ river ended Rogez’s main event.

In what was becoming commonplace, about two hours came and went before Jais was eliminated in fifth spot by Than Trong.

Jais, with A♥ Q♠, moved all-in on a flop of 9♠ 8♥ 6♣ flop, but ran into the K♣ K♦ of Than Trong. While the Q♥ turn handed Jais two additional outs, the 5♠ on the river was no help and that was that for his tournament as Than Trong took over as chip leader.

The remaining four players then enjoyed a 60-minute break, which seemed to inspire them as aggressive play became the norm.

This sudden departure from conservative play saw Than Trong lose a massive chunk of his chip stack to second-placed Kursevich, when, after raising from the button, the Frenchman saw small blind Kursevich three-bet.

The action folded around to Than Trong, who made a strong play by four-bet shoving while holding A♥ Q♠. But Kursevich immediately called with K♠ K♦ and took down the pot when he picked up trip kings on a K♣ 5♥ 3♦ A♠ 7♥ board.

Now the dominant chip leader, Kursevich eliminated Kerignard soon after when the former’s K♣ J♠ held up against the Frenchman’s Q♠ 9♠ when the board came 5♣ 5♠ 4♣ 3♥ 5♦.

Shortly after, Than Trong was gone in third place when his all-in move with K♦ 10♠ lost out to the A♣ J♠ of Kursevich. The board once again failed to improve either player’s hand, so it was now time for heads-up play.

Bertrand Grospellier Among Those Failing to Cash

Additionally, players such as Team PKR Pro Jake Cody, Zimnan Ziyard and Fatima Moreira de Melo all hit the rail earlier than they would have hoped – again without making any cash.

Last year’s winner, Parisian Lucien Cohen, failed to cash this time around, too, after leaving with €880,000 for victory in the previous main event that featured 891 entrants.

The next EPT stop of Season Eight pulls into Denmark on February 20 for six days that will culminate in the DKK37,250 buy-in main event at the Casino Copenhagen.

The top 10 payouts from the PokerStars EPT Deauville main event: