708 entrants show up for the Day 1b – the second and final starting flight. 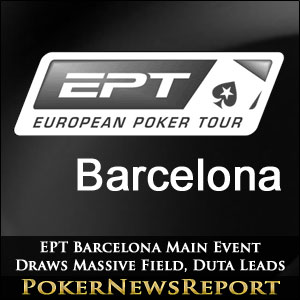 708 entrants show up for the Day 1b – the second and final starting flight.

An event sponsored by PokerStars attracted tons of entrants – who would have thought? Well, based on its stranglehold on the online poker market, just about everyone. Yes, PokerStars did it again, this time at a live event, drawing 708 players and 1,226 total to the EPT Season 10 Barcelona Main Event.

Barcelona, which is the first stop on the tour, is notorious for being one of the most popular travel destinations among players, in large part due to its ideal location and exciting nightlife. And over the years, it’s only increased in popularly. To put things into perspective, registration isn’t even closed yet and this year’s Main Event has already attracted nearly 150 more players than last.

On a side note, some poker players that I’ve spoken with often ask how it’s possible to get knocked out of a super deep tournament on Level 1. Perhaps an example from this year’s EPT Barcelona Day 1b will provide some clarification: Michael Brady and Zsolt Vasvenskki saw a flop of 10♥5♠4♥. Shockingly, the two players would raise each other all-in right there on the flop. Vasvenszki would turn over 5♥5♦ for middle set and Brady the mortal nuts – 10♠10♦.

While one can’t imagine Vasvenszki felt great about going all-in without the nuts over 200 big blinds deep, it’s nearly impossible to get away from middle set on a somewhat draw heavy board. Fortunately for him, in what amounted to the sickest reversal of fortunes of the day, he turned quads and won the hand. As the old adage goes, “It’s better to be lucky than good.”

The remaining fields will combine for Day 2 on Tuesday, and will resume play at 12:00 PM Barcelona time.