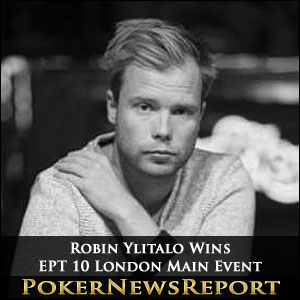 Robin Ylitalo is not one of the most recognizable names on the tournament poker scene. Before this weekend, he had never won a major title, never cashed a live tournament for more than $100,000 and rarely appeared on a televised broadcast. All that changed on Saturday when the 27-year old Swede captured the 10th annual PokerStars.com EPT London Main Event title. Let’s break down the final table action.

The final eight players took their seats around noon, and it wouldn’t be long before Kully Sidhu would make a quick exit. Eventual runner-up George Karakousis opened under the gun with a min-raise to 100,000, and Sidhu jammed for about nine big blinds from the cut-off. The pot committed Karakousis called with J♥10♠. Sidhu held A♠Q♦. The flop came J♣7♦K♠, turning the tide decidedly in Karakousis’s favor. Although Sidhu had two overs and a gutshot, it was not meant to be, as the board ran out 3♥ and K♦. Sidhu’s early exit was good for £60,640.

Next up on the chopping block was Jan Olav Sjavik, who moved all in with 7♠{7h|}. Ludovic Geilich tank-called from second position with 9♦9♣. Things would go from bad to worse for Sjavik, as the 9♥ came right on the flop. The turn and river were bricks and just like that, Sjavik was gone.

An entire level would pass before the next elimination, but it would be worth the extended wait. Stefan Vagner, holding J♦8♦, called a raise from Geilich. Ylitalo squeezed to 455,000 with A♥K♦ and Geilich folded. What should have been a relatively easy fold for Vagner turned into a nearly 2 million chip bluff-shove. Ylitalo called instantly. The 7♠6♥5♥ flop gave Vagner 14 clean outs and nearly 50% equity in the hand. But the A♦ hit the turn, taking Vagner’s pair outs away and the lowly 2♥ secured Geilich’s win.

Several players would be eliminated in Level 30 (50,000/100,000/10,000), the first being Jeff Rossiter. The former chip leader would lose a flip holding 4♥4♦ against Karakousis’s K♦Q♥. His fifth place finish was worth over £152k. Shortly thereafter, the suddenly short stacked Geilich would four-bet jam with a rather mediocre holding, Q♥8♥. Ylitalo instantly called with A♣Q♦ and had the rising pro in bad shape. The flop brought the A♠ and the 8♦, leaving Geilich needing to catch one of the remaining eights to win the hand. The turn was the J♦ and the river the 9♠, and just like that Geilich’s dreams of winning an EPT title crumbled.

Leo McClean would finish third. The 24-year-old won his way into the tournament via a £82 satellite on PokerStars, and before EPT London never cashed for more than £1,900. Having already won his buy-in back for donning a Skrill patch and outlasting every other player who did the same, the amateur would open for 225,000 with A♦Q♦. Karakousis would then over-jam for McClean’s remaining 3.26 million. McClean would eventually read the situation correctly, making the call. Karakousis revealed 3♠3♥ and the players were off to the races. The flop came 8♥J♥5♥, a terrible flop for McClean as it took away two of his six outs. The turn and river were no help either, and McClean was left to walk away with approximately £250k – a nearly 3,000 times return on his initial investment.

The stage was set for heads-up play. Karakousis began the battle with 7.11 million chips to Ylitalo’s 11.12 million – a sizable deficit, but certainly not overwhelming. Unfortunately for Karakousis, he would not put up much resistance, losing about a million chips in the first few hands before five-bet jamming with A♠6♦ for 52 big blinds (6.2 million). He was instantly looked up by Ylitalo’s A♣K♣.

The board ran out 2♠5♥5♣8♣J♥, and Ylitalo was declared the EPT 10 London Main Event winner. His tremendous effort was good for £560,980. Karakousis would have to settle for a consolation prize of nearly £350k.

And thus concludes our ongoing coverage of the EPT 10 London Main Event. See you at the next stop!