Twenty-nine players had their dreams of winning the EPT London Main Event dashed. 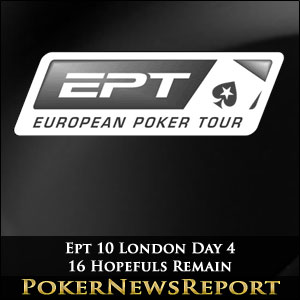 Twenty-nine players had their dreams of winning the EPT London Main Event dashed.

Day 4 of the EPT London Main Event saw 45 players, all of them guaranteed at least £11,425 for their efforts, return to action. With the blinds high, tension rose, and so did the level of play. When the smoke cleared, it would be renowned pro David Yan leading the pack.

On Day 4 the word “all-in” was more popular than Phil Ivey at a craps table, as nearly two-thirds of the remaining field would be eliminated in less than four levels of play. On the first level of the day Sebastian Blom, who is indeed the brother of Isildur1, would be sent packing when his 8♣8♠ failed to crack the 10♦10♥ of Stefan Vagner. Seemingly within minutes, another dozen or so players hit the rail, including Paul Berende (34th place) and one of two women left standing, Kitty Kuo.

Kuo was eliminated when Robin Ylitalo called her shove from the big blind with J♦J♠. The board ran out 8♥10♣3♣Q♦9♦ giving Kuo an inferior pair. Her 41st place finish was good for £11,425.

Recognizable British pro David “Devilfish” Ulliott would fall in 31st when his 8♥8♣ would be cracked by the A♣3♦ of Georgios Karakousis. Shortly thereafter, the last woman standing, Carla Sabini would be felted in 30th.

Other notables Shannon Shorr, Salman Behbehani, Andy Mosley and Steven Watts would all fall in rapid succession. EPT 10 Barcelona High Roller Champ Thomas Muhlocker was bounced in 18th place when his shove with A♣10♦ was called by Ludovic Geilich’s K♥3♥. The flop came A♥5♥9♣ giving Muhlocker top pair to Gelilich’s nut-flush draw. But the 2♥ on the turn would quickly evaporate Muhlocker’s dreams of a second EPT title.

The last player eliminated on the day was Candido Gonclaves, who shoved with A♥Q♣ only to be called by Stefan Vagner’s A♦K♣. A meaningless Ace came on the flop, followed by two bricks, and the remaining 16 players began bagging their chips.

The biggest story of Day 4 belonged to feared young pro David Yan. After busting a short-stacked Steven Warburton with 7♠7♣ versus Warburton’s A♣9♣, Yan would accumulate more chips by winning a race against Steven Watts. Holding 6♠6♥ against Watts’ A♦K♦ Yan would be forced to sweat the turn and river after a dangerous 3♠10♥Q♣. But unfortunately for Watts, no help came and Yan would find himself sitting on a very healthy stack comprised of nearly 200 big blinds.

The action will pick up tomorrow with approximately 37 minutes remaining in Level 22. Blinds will start at 8,000/16,000/2,000 as the remaining runners will play down to the final eight. Stay tuned for more updates and a list of the lucky finalists tomorrow.