Martin Kozlov leads the remaining 45 players by a slim margin in the European Poker Tour 10 London. 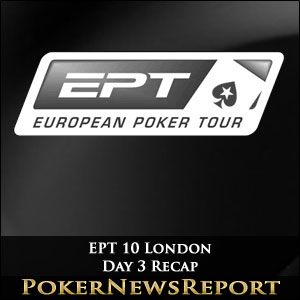 Martin Kozlov leads the remaining 45 players by a slim margin in the European Poker Tour 10 London.

Day 3 of the EPT 10 London saw 106 hopefuls vying to become the next champion of the PokerStars sponsored event. Of them, 19 would fail to cash. Stars like Paul Volpe, Jackie Glazier, Kyle Julius and former chip leader Maximilian Senft would all hit the rail short of the money. But where some would fall, others would rise. Most notably, Martin Kozlov coolered and bad beat his way to the top of the leaderboard, amassing a whopping 1,351,000 million chips along the way.

In one of the largest pots of the day, Daniel Reijmer would bet 25,000 on a J♣10♦5♦ board. Kozlov, also involved in the hand, would raise to 78,000 total, and Reijmer would quickly call. The turn brought the 7♥ and Kozlov would jam. Reijmer called the 225,000 bet and saw the horrendous news as Kozlov flipped over J♣J♥ for top set. Reijmer held 10♣10♥ and would be eliminated in brutal fashion. The massive pot brought Kozlov over the seven figure chip barrier.

With the day winding down and most players looking forward to bagging their chips, Kozlov was just getting warmed up. During one of the last hands of the day, Kozlov bad beat Sam Greenwood for his last 150,000 chips. When the money went in the board read 9♦10♦9♣10♠. Greenwood held Q♣Q♥ and Kozlov’s K♣10♣. The river was a brick and Kozlov would scoop another impressive pot.

If that weren’t enough, earlier in the day Kozlov would crack Aces with a flopped set. Holding 10♠10♥ Kozlov called a three-bet to 33,000 from Chris Brammer. The flop was a coordinated one: 10♣7♥J♥. Brammer surprisingly checked, Kozlov bet and Brammer called. The turn completed the flush 4♥, and with no heart in his hand, Brammer could have easily folded when Kozlov bet a second time, this time for 76,500. Instead, after about six minutes of deliberation, Brammer jammed for 247,500.

Now it was Kozlov’s turn to go into the tank. Although he held a set and had a redraw to a flush, there were several hands that had him crushed. But middle set proved too good to simply throw away. Kozlov called, and just for good measure hit quads on the river.

For some min-cashing a major tournament like the EPT London is a major accomplishment. For others, like Team PokerStars Pros Henrique Pinho and Theo Jorgensen there is no worse feeling. Majestic High Roller winner Mike Watson and this year’s UKIPT High Roller third place finisher Kenny Hallaert also just barely made the money.

Although no Team PokerStars players remain in the tournament, there are still quite a few familiar faces remaining including Australian Jeff Rossiter (601,000), Timothy Adams (271,000) and Sebastian Blom (216,000). Day 2 chip leader Tudor Purice increased his chip count by a modest amount on Day 3, and currently sits with a healthy stack of (825,000).

The top 5 chip counts going into Day 4 are:

Day 4 resumes today at noon, with the remaining 45 players expected to play down to two tables. Stay tuned for a recap later in the day.