It seems like Annie Duke and the members of the Epic Poker League Standards and Conduct Committee cannot bear to be out of the headlines for the wrong reasons. 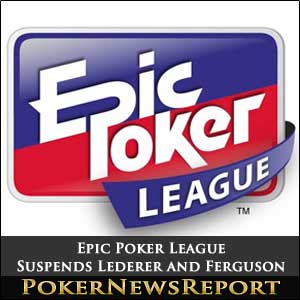 It seems like Annie Duke and the members of the Epic Poker League Standards and Conduct Committee cannot bear to be out of the headlines for the wrong reasons.

Having allowed a known thief/cheat to win their inaugural Main Event and then barring a man who had served his time twenty years previously from competing in the second, they have now indefinitely suspended Howard Lederer and Chris Ferguson – the two players least likely to turn up to any of their events – even though they have only been accused (not convicted) of a crime.

Jumping on a Bandwagon

Even the least cynical follower of the Full Tilt Poker saga will acknowledge that this is simply a case of drawing attention to the league rather than performing a justifiable disciplinary procedure. Both Lederer and Ferguson have been accused (not convicted) of civil (not criminal) offences, and no action has been taken against Standards and Conduct Committee member Andy Bloch – even though he is acknowledged as one of the joint owners of Full Tilt Poker and named in the Todd Terry´s civil complaint against Full Tilt Poker et al.

In addition to Andy Bloch (who recused himself from voting on the suspension of Lederer and Ferguson), there are plenty of other players permitted to compete in the Epic Poker league who have a past they – and the league – would rather forget. Dutch Boyd, who reached the final table in the last EPL Main Event, was the man behind PokerSpot – an [geolink href=”https://www.pokernewsreport.com/online-poker-rooms”]online poker site[/geolink] which “disappeared” in 2001 owing players $400,000. Mike Matusow has spent time in jail for drug offences and, of course, there is Annie Duke herself who, although not eligible to compete in any of the EPL Main Events, was getting paid to promote a site that had a long history of multiple cheating scandals and which still owes online poker players $50 million in unpaid cash outs.

The dwindling list of players eligible to compete in EPL events could be reduced even further according to Committee Chairman Stephen Martin. Martin stated in an interview after the announcement of the two players´ suspensions was made, that the Standards and Conduct Committee would continue to review the ongoing Federal action against Full Tilt Poker. “If other members are named in the actions, the Committee will consider additional disciplinary action” he said, adding “The government chose to name Howard Lederer and Chris Ferguson individually in their roles as members of the board of directors Full Tilt.”

The concept of having a professional tour is probably good for the game, but the founders of the Epic Poker League must be regretting that they based their qualification criteria on such high standards of integrity. After all, the secondary purpose of the Epic Poker League is to sell the events to TV – and who is going to want to watch if none of the bad guys are allowed to play!