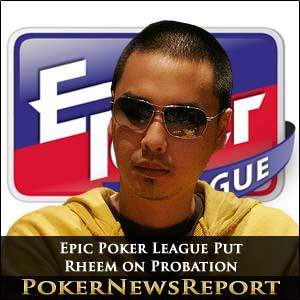 The EPL released a statement – signed by chairman Stephen Martin – that cited Chino Rheem’s violation of the league’s Code of Conduct following his alleged failure to pay debts to other players.

The press release states that, while the Los Angeles-based pro’s “ongoing personal financial obligations (were) incurred prior to the League’s formation”, the EPL believes that those troubles had a significant impact on their inaugural tournament in Sin City.

The EPL added that Rheem will remain on probation until he “has satisfied his pre-league formation financial obligations” and therefore “must continue to proactively repay his outstanding debts by, from this point forward, using any and all proceeds” he earns through poker – no matter which country his is successful in – “to satisfy all of his remaining financial obligations in an orderly fashion”.

It will be interesting to see what the seventh-placed finisher in the 2008 World Series of Poker (WSOP) main event does over the next few weeks and months, although the league has acknowledged that he has already made efforts “to partially satisfy outstanding financial obligations” from his latest success.

Additionally, the league has also proclaimed that any “new violation of the Epic Poker League rules (including the Players’ Code of Conduct) or the law” by Rheem – who is thought to have accumulated more than $5.7 million from live poker tournament winnings – will result in his immediate suspension from the EPL.

The EPL committee that issued the disciplinary proceedings is made up of chairman Martin, Matt Savage – the league’s tournament director – and league commissioner Annie Duke – who is a non-voting member – as well as poker pros Alec Torelli, Nick Schulman, Michael McDonald, Joe Hachem, Chad Brown, Andy Bloch and Eric Baldwin,

Here is the whole EPL press release for your perusal:

“As of today’s date, the Standards & Conduct Committee has voted to place Epic Poker League cardholder David “Chino” Rheem on probation subject to the rules and procedures governing the conduct of Epic Poker League members as a result of ongoing personal financial obligations incurred prior to the League’s formation but impacting the League during the Inaugural Epic Poker Main Event. The terms of Mr. Rheem’s probation, designed for the Committee to effectively monitor the personal conduct of Mr. Rheem as he works to meet his personal financial obligations as required under the Players’ Code of Conduct, are as follows:

“2. Mr. Rheem must continue to proactively repay his outstanding debts by, from this point forward, using any and all proceeds Mr. Rheem personally receives from personal poker winnings worldwide to satisfy all of his remaining financial obligations in an orderly fashion.

“4. In reaching its decision, the Committee recognized that Mr. Rheem used best efforts and all of the proceeds he personally received from winning the Inaugural Epic Poker league Main Event to partially satisfy outstanding financial obligations. Mr. Rheem must continue to demonstrate this commitment to honoring all of his financial obligations.