The “Epic” Poker League – an American league established with the intention of forming an exclusive championship for the world´s “best” players (as chosen by the Epic Poker League) – has started its first Main Event at the Palms Casino in Las Vegas. 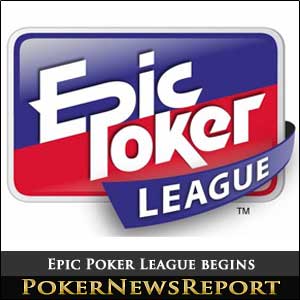 The Epic Poker League – an American league established with the intention of forming an exclusive championship for the world´s “best” players (as chosen by the Epic Poker League) – has started its first Main Event at the Palms Casino in Las Vegas.

Many Familiar Faces at EPL

Among the players competing for the $982,660 first prize and the glory of leading the Epic Poker League are many players that will be familiar to readers due to their performances in the World Series of Poker. Ben Lamb, Jason Mercier and Andy Frankenberger are all bracelet winners from the 2011 WSOP series who carry respectable chip stacks through to Day 2 of the event, while Michael “Breeders Cup” Mizrachi, Phil Hellmuth and Lock Poker sponsored Chris Moorman (!) will all have to find another game to play in tonight – having been among the first to bust out on Day 1.

As well as being able to enter EPL Main Events if you are a selected to be in the “Epic Global Poker Index” and have $20,000 in cash to spare, regular poker players can also qualify for the opportunity to sit among the stars through various satellite tournaments held at the Palms Casino with a buy-in of $180.00. Qualifiers from these satellites competed in the pro-am event which concluded on Monday, with the top nine finishers winning their seat at the EPL Main Event.

Qualifiers from the Pro-Am

Andy Bloch (who was qualified to play in the event anyway) hit the rail towards the end of Day 1, but Dan Fleyshman, Brandon Meyers, Steve O´Dwyer, Clifford Waite and Sean Getzweller will each be happy with their day´s work, and form part of the 63 players who will take their seats when play resumes tomorrow at noon.

Andy Frankenburger took down the other poker tournament to be hosted as part of the EPL´s inaugural poker series – a $240.00 buy-in charity tournament with $100.00 re-buys and add-ons. Prizes for the tournament included entries to the pro-Am event (above), iPads, a Palms Resort voucher, jewellery and tickets to local events. The charity event raised $53,800 for victims of the Joplin tornado in Missouri.