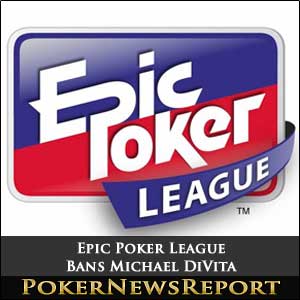 In an incredible sequence of events at the Palms Hotel & Casino in Las Vegas, Epic Poker League Pro/Am qualifier Michael DiVita – who finished eighth in the qualifying tournament – was escorted from the premises soon after attempting to register for the EPL Main Event.

Michael DiVita, who qualified in the Pro/Am alongside Greg Mueller, Phil Hellmuth, Sean Getzwiller and Brandon Meyers, and who was due to play among some of the top names in poker, officially “withdrew voluntarily” from the tournament, although speculation is rife that peer pressure was responsible for his non-participation.

It transpired that DiVita is a registered sex offender with a conviction in 1991 for “assault with intent to commit a specified sex offense, annoy or molest child under 18 years of age, sexual battery and sexual battery involving a restrained person”. He was also arrested on a similar charge in 2008, which was subsequently dropped when the victim refused to testify.

Not a Breach of the EPL Code of Conduct

The Epic Poker League´s “Code of Conduct” came under scrutiny following Chino Rheem´s victory in the inaugural EPL Main Event due to the winner´s history of borrowing money from fellow players and then failing to pay it back. However, the EPL Code of Conduct states makes no mention of whether a poker player who has been convicted of a crime and served his time thereafter should be barred from competing in EPL events.

DiVita Receives a Refund and Kaplan Takes His Place

Having been “unable” to register, DiVita was refunded the $1,500 he paid to enter the Pro/Am and his seat at the Main Event was awarded to tenth place finisher – Jamie Kaplan. News on how Kaplan, the other eight qualifiers and the remaining players who have splashed out $20,000 to compete in the event can be found by clicking here.