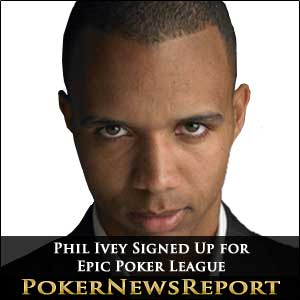 Jeffrey Pollack – the former commissioner of the World Series of Poker (WSOP) – and poker star Annie Duke, who lifted the 2004 WSOP $2,000 Omaha Hi-Low Split-8 or Better event, came up with the idea for the league that will kick off on August 5 at The Palms Casino Resort in Las Vegas.

The Epic Poker League will include four main events with $20,000 buy-ins – although they will be rake-free, but feature $400,000 in added money – alongside charity and pro-am tournaments.

There will be 218 top names – all invited – battling it out over the course of the season to reach next year’s 27-player freeroll final and a chunk of the $1 million prize pool.

FS+G chief operating officer Jeffrey Grosman reckons The Epic Poker League will be “no ordinary tournament league (as) our fields will be some of the toughest in poker history”.

With Grosman also expecting “the competition to be nothing less than epic”, he believes there was only one tournament name “ that could live up to the players’ incredible skill and talent, (so) epic was a natural fit”.

Pollack and Duke aim to have the league televised – including the first EPL $1,500 pro-am event on August 5 – but also hope to include social media games and interactive digital programming.

The pro-am tournament will provide nine wildcard seats for the initial $20,000 main event at The Palms, with the casino presenting a $340 super satellite every Saturday until July 31, while a $180 super satellite on every Sunday until the same date will also supply one pro-am seat each.

However, The Palms will also offer single-table satellites to qualify for the super events every day for $65 and $40.

EPL commissioner Duke believes that, “for a $40 investment, anyone can have a shot at the glory on a national stage, a million dollars and poker’s most exclusive title” before adding that this “ opportunity is unmatched in poker”.

This latest venture follows on from FS+G’s purchase last week of the Heartland Poker Tour (HPT), which it will now televise and produce.