All 49 seats for the $300,000 Super High Roller Bowl at ARIA Resort and Casino have been purchased, and 47 of the entrants have been confirmed. 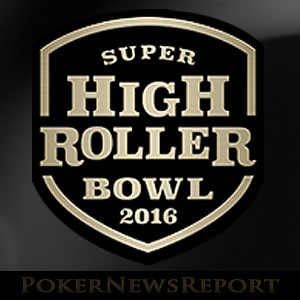 All 49 seats for the $300,000 Super High Roller Bowl at ARIA Resort and Casino have been purchased, and 47 of the entrants have been confirmed.

Super high stakes poker tournaments have become extremely fashionable in the past several years, and they’ve recreated a lot of the buzz and exclusivity that used to come with high-profile events like the Main Event of the World Series of Poker. Six-figure and seven-figure buy-ins have become the norm for these types of events, and they’re excellent for television and poker because they bring together the mix of high-profile professional players and wealthy businessmen that have made poker so interesting to watch in the past.

Now you’ll get a chance to watch 49 people square off head-to-head in this year’s Super High Roller Bowl with its $300,000 entry fee, and most of the players for the event have already been confirmed.

Huge Deposits to Reserve a Spot

One of the issues with a big event like this is that there are a limited number of spots, so many players might want to “reserve” a seat at the game only to disappear later and not show up. To help prevent this type of situation, a huge deposit of $30,000, which is non-refundable and goes towards the $300,000 entry fee, has been required to reserve an entry.

This is a very good policy that will hopefully avoid situations like what has happened with the big One Drop event in the World Series of Poker where many high-profile players have said they would be in only to back out and let the public down.

There are four things that the event organizers have done to make this event extremely interesting, at least compared to the average high-roller event. To start with, of the 49 seats (seven tables of seven players to start), a total of 14 of them have been reserved for non-professional players who still qualify as super high rollers, and this will include wealthy businessmen and other players with big wallets that will make the tournament more interesting.

What’s more is that the $300,000 entry fee does not include any amount of rake. This increases the value to the players and increases interest from the best names in the world. To further beef up the prize pool, they’ve added an extra $300,000 to the event to make it an even $15 million in total payouts.

Finally, you have the television-friendly format itself with seven-seat tables. This will encourage action without driving the game down to completely short-handed play right off the bat, which is typically regarded as tables with six seats or fewer.

There are a whole lot of big-name players who have committed to playing in this event. To name just a few:

Only two of the 49 players haven’t been announced as of yet, and while some people have speculated on who those can be, there are currently no rumors that Justin Bonomo’s grandma could be in the lineup.

For the average US player, it might not seem like a big $300,000 event has that much impact. However, what you need to understand is that big events like this, especially those that have been especially built for television, are extremely important for the overall health of the poker economy as a whole, even for low stakes, online players.

Here’s why. If you think back to the big poker boom that started around 2003, one of the main factors in the surge of popularity that the game received was that people could watch important, high-stakes games on television anywhere. At the time, having a $10,000 buy-in was a big deal, but the public become desensitized to it after the constant pushing of satelites and other events that would let them mix things up with the pros they had seen on television.

Once playing with the pros stopped seeming like such an exclusive thing, the popularity of poker started to fall off a bit, even before legislation and events like Black Friday slowed things down. Events like the Super High Roller Bowl, that have an absurdly high buy-in and that are made to produce great television, are key in helping to boost the poker economy and to maximize the exposure of the game that leads to more players at the tables at US-friendly sites, and that helps everyone who plays at all stakes.