The Entraction network has announced that from September 29th players from Canada, Israel, Norway, Russia and Turkey will be blocked from playing on Entraction poker sites. 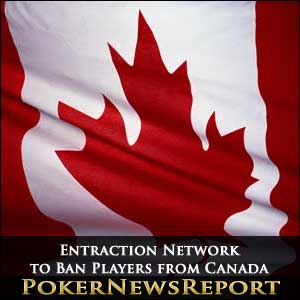 The Entraction network has announced that from September 29th players from Canada, Israel, Norway, Russia and Turkey will be blocked from playing on Entraction poker sites.

The move is anticipated to open the door for Entraction to eventually move into the US market when online poker becomes regulated, however whereas Israel, Norway, Russia and Turkey all have laws which affect the online movement of money (similar to UIGEA), and the withdrawal from countries with unclear regulations was widely anticipated, the inclusion of Canada in the “exclusion” has surprised many.

Are the Lotteries to Blame?

Although no official word has come from Entraction´s owners – International Game Technology (IGT) – it is known that IGT provide many video lottery terminals throughout Canada and may have a “no competition” clause written into their contracts.

It might also be the case that IGT want to break into the US video lottery market and fear that any perceived irregularities in their peripheral activities may handicap business opportunities in the States.

Not a Unique Move

The Entraction is not the first company to withdraw from Canada. Neteller pulled out shortly after UIGEA and even though most iPoker skins still welcome players from Canada, Paddy Power Poker also declines players from the Land of the Maple Leaf. Boss Media (suppliers of software for BWin Poker) completely pulled out of Canada following province-wide online casino regulation and Entraction may not be the last company to announce their exit from the market.