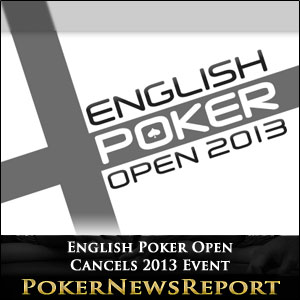 The English Poker Open – won last year by Mickey Petersen – has been a popular event on the London poker calendar and has formed part of the London Poker Festival since 2009. Last year´s event attracted 138 players to the Fox Club in Shaftesbury Avenue and created a prize pool of £276,000.

This year´s tournament was scheduled to be played at the Aspers Casino in Stratford from September 27th to September 29th, and only two weeks ago organisers were bullish about the event – issuing a press release that said they were anticipating a £500,000 prize pool.

However, without any warning, announcements were simultaneously posted on the websites of englishpokeropen.com and sponsors raketherake.com stating that the event had been cancelled “due to unforeseen scheduling issues which have arisen”.

Organisers of the event were unwilling to shed more light on what “scheduling issues” had actually been “unforeseen”, although they denied any link between the cancellation of the English Poker Open and any other events that were taking place on the same dates.

Also scheduled for the same dates are the £275.00 buy-in UKIPT PokerStars LIVE Series taking place at the Hippodrome and the £165.00 buy-in 888 Poker SuperStack at Genting Casino´s “Mint” Poker Club in Cromwell Street; however, these events have been known about for a long time.

A Tweet that was sent out by the organisers confirming the cancellation of the event only referred disappointed festival-goers to the message on the EPO website which read:-

It was a tough decision to postpone the EPO, but on balance the right choice as we want to ensure that players at the event have the sort of top quality experience that they expect from the English Poker Open brand.

Is There a Future for a London Poker Festival?

The cancellation of the English Poker Open is more nail in the coffin of the London Poker Festival. “Poker in the Park” died a death in 2011 and the venue/dates for the British Poker Awards – previously a highlight of the Festival – have yet to be announced, even though voting has been open for several weeks.

PokerStars are promoting their joint UKIPT/EPT stop at the Grand Connaught Rooms between October 2nd and October 18th as the “PokerStars EPT London Festival”, but with no Unibet Open in London this year, and the GukPT Grand Final re-scheduled for November, it looks like PokerStars and 888 Poker have the London autumn season to themselves.