End of the Party for Zynga Plus Poker

Zynga is to close its ZyngaPlusPoker and ZyngaPlusCasino operations in the UK, effectively terminating its unsuccessful partnership with Bwin.Party. 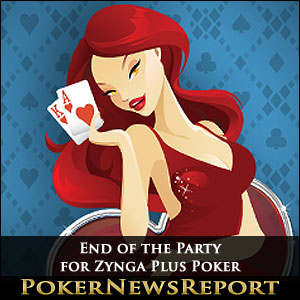 Zynga is to close its ZyngaPlusPoker and ZyngaPlusCasino operations in the UK, effectively terminating its unsuccessful partnership with Bwin.Party.

In April 2013, Zynga took the step from play money giant to real money gaming when it entered into a partnership with Bwin.Party. At the time Zynga was testing out the potential for entering the real money online poker and casino markets in the UK with the ultimate goal of conquering the US when regulation allowed.

The aim of converting players from its successful social online products to poker and casino skins on the Bwin.Party network was spectacularly unsuccessful, and the partnership fared little better when ZyngaPlusPoker for real money was launched on Facebook in January 2014.

The reasons given at the time for the failure of the partnership included that poker players in the UK would have already had a real money poker account, and there was nothing special about the promotions offered by ZyngaPlusPoker to encourage players to jump ship and compete on a Bwin.Party skin.

It was also significant that many play money gamers and Facebook users are under the age of eighteen and live in Asia, and would therefore be disqualified from opening a real money poker account in the UK with ZyngaPlusPoker. With this in mind, Zynga withdrew their application to become a provider of real money poker in Nevada in September 2013.

The withdrawal of the online poker license in Nevada indicated a shift away from Zynga´s real money gaming experiment to channel its resources into developing more games for the freeplay gaming market. At the time there was speculation that Zynga´s partnership with Bwin.Party would also come to an end, but the ZyngaPlusPoker and ZyngaPlusCasino websites remained active.

However, at the end of last week, online real money players in the UK started receiving brief emails from Zynga saying that the two sites would be closing shortly and advising players that they should withdraw any funds that they held on the sites:

We are very sorry to announce that ZyngaPlusPoker and ZyngaPlusCasino will be closing shortly. If you have a balance please log in to withdraw it. If you are having problems logging in you can reset your password or you can always contact us by calling FREE on 08003767968.

In recent years, Bwin.Party has tried to introduce a more social element to its online poker product – integrating social media into its software in order that players can share their achievements and communicate better with each other. Judging by the declining traffic at Bwin.Party over the past twelve months, it would appear that being social with each other is not a top priority for online poker players

The company also acquired Win Interactive as a social gaming platform in 2013, which returned an operating loss of £7 million last year and prompted criticism from industry analysts who stated: Management should be embarrassed by these results given the strong performance of bwin’s peers.

It is fairly apparent that Bwin.Party´s flirtation with social gaming has been an unmitigated disaster. Hopefully the closure of ZyngaPlusPoker and ZyngaPlusCasino will influence the future decisions of those in charge of this once-great company, and get Bwin.Party back to focusing on the provision of a half-decent poker product. That is the least that the site´s long-suffering players deserve!