Finnish student Emil Alander leads the Grand Live Main Event in Malta, with all thirty-six remaining players in the tournament assured of cashing in the event. 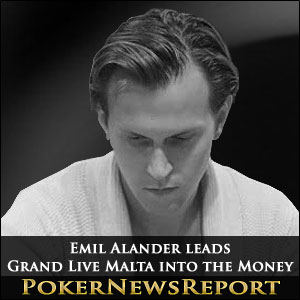 Finnish student Emil Alander leads the Grand Live Main Event in Malta, with all thirty-six remaining players in the tournament assured of cashing in the event

It took only six levels of play at the Portmaso Casino in Malta yesterday to reduce the field of 113 players that survived Day 1 down to the thirty-six players who would cash in the event. Emil Alander leads the remaining players with a chip stack of 371,500, which he built up quietly from an opening stack of 64,500 chips while tumult was occurring all around him.

Indeed, the start of Day 2 was delayed due to a huge Mediterranean cloudburst lashing down outside the casino – a forerunner of the storm that was about to take place at the tables, as both Thomas Lind and Sergio Aguilar knocked out players in the first hand of the day to stake their claims on the first prize of €52,500.

Both Adam Balint and Peter Onnestam can consider themselves unfortunate to be bust from the Grand Live Malta Main Event so soon. Balint (A♠ Q♠) was initially behind Thomas Lind (A♥ K♥) when shoving over the top of Lind´s pre-flop three-bet, but the flop of 5♠ 6♠ 5♣ gave him hope of a Spade draw and the 6♥ on the turn split the pot (both having two pairs with an Ace kicker). However, the A♦ on the River gave Lind two pairs Aces and Sixes with a King Kicker, and Balint (Queen kicker) was out of the tournament.

Peter Onnestam was even more unlucky, as he was ahead of Sergio Aguilar when the chips went into the pot pre-flop with K♦ K♠ -v- Q♦ Q♥. The flop delivered Q♠ 6♠ 3♠, which although giving Aguilar trip Queens still left the possibility of a Spade draw; but the 4♥ on the Turn and 6♥ on the River filled Aguilar up and Onnestam was left to rue his misfortune and contemplate the clouds still drifting over the Portmaso Casino.

Luck Comes in Pairs for Dubrovkin

Alexey Dubrovkin had opened Day 2 in a fairly comfortable top ten position, but his participation in the tournament started to be in doubt after he doubled-up Vadims Oleksisins Aces > Fours in Level 12 (blinds 800/1,600 – ante 200) and then found no callers when he himself was dealt pocket Aces. When his lucked turned though, it turned with a vengeance.

Picking up A♦ A♠, Dubrovkin was shoved into by Paraskevas Kosmidis – who had been dealt J♦ J♣ – and had an easy call to make. The flop fell 6♦ K♠ A♥, and Kosmidis was out of his chair before the 8♥ and 7♥ completed the hand. One level later and Dubrovkin was again dealt pocket Aces. Steffen Kylevik was the unlucky player who shoved into him with K♦ K♣, but Dubrovkin had a sweat on when the K♥ door card was turned over. Fortunately for the Russian, the A♦ also appeared on the flop and, with no case King appearing on the Turn or River, Dubrovkin chipped up into second place.

The Malta Grand Live Main Event will recommence at 1.00pm at the Portmaso Casino with the 36 players about to embark on Level 16 (blinds 2,000/4,000 – ante 500). Emil Alander will be a happy chap this morning to find out he has avoided any of the top ten players in his table draw and play is scheduled to continue until a final table of nine players is left, who will then compete on Saturday for the Grand Live Malta title.

The first nine players eliminated today are assured of a min-cash of €2,215, but those below at the head of the leaderboard will have their sites fixed on the €52,500 first prize:-