Elior Benjamin Sion maintained his chip lead throughout the penultimate day of the WPT National London Main Event in the race for the £80,000 first prize. 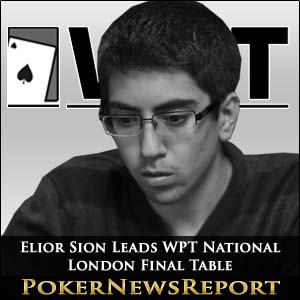 Elior Benjamin Sion maintained his chip lead throughout the penultimate day of the WPT National London Main Event in the race for the £80,000 first prize.

The climax of the World Poker Tour National London Main Event promises to be an entertaining event when the cards go in the air at Aspers Casino in Stratford this afternoon. Elior Benjamin Sion holds a big chip advantage over his seven opponents; however the payouts for the tournament are structured in such a way to encourage a gamble from the short-stacks when the opportunity comes along.

The Londoner – who is running hot after two final table appearances in EPT side events – kept ahead of the leaderboard by eliminating Xuan Nguyen (AQ < Pocket Tens) and built his chip stack throughout the day from a starting 593,000 chips to 1,731,000 chips.

Talent Within the Chasing Pack

Sion´s closest challenger is Rasmus Larsen (1,268,000 chips) – who also enjoyed a profitable EPT with a deep run in the Main Event. Larsen emerged from the chasing pack close to the end of the day when eliminating Sebastien Muller in tenth (J♣ J♦ > 10♦ 10♥) and Radoslaw Morawiec in ninth (hand unreported) to set the final table.

Currently in third position is Reece Lewis (692,000 chips) – courtesy of his elimination of Manig Loeser (Q♣ Q♠ > A♣ K♣) – and he is followed by several players with a wealth of major poker tournament experience including UKIPT regulars Kevin Williams (394,000 chips) and Carlo Citrone (66,000 chips) – whose Hendon Mob database of live poker cashes stretches back more than a decade.

Looking Ahead to Final Table

When play resumes at Aspers Casino in Stratford this afternoon, there will be just under three-quarters of an hour remaining in Level 21 (blinds 6,000/12,000 – ante 2,000) and the average stack is 681,250. One interesting player to watch will be last woman standing – Emma Tolley – who has position on both Sion and Larsen, and who showed yesterday that she is more than capable of holding her place among her male counterparts.