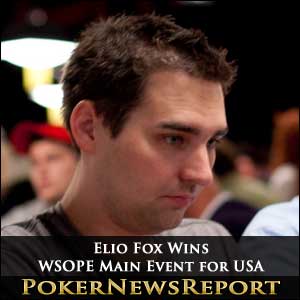 The chip leader from day four survived several scares and enjoyed his fair share of good fortune, but made the right calls when it mattered to cap a fantastic week for the Americas.

Speaking after his victory, Fox acknowledge the contribution that luck had played in his triumph “I ran really well. I think I am pretty good at poker. But people put too much stock into somebody winning a tournament and I think that all the time when the media talks about a new player winning some tournaments….there’s a lot of luck in tournaments. But, I was really fortunate to run this well. I certainly hope it continues.”

A Day of Drama, but Little Action

Throughout the day, the final table resembled a chess game rather than the conclusion of a valuable poker tournament, with players jockeying for position and trying to gain a psychological advantage. Fates changed on a hesitation or a distraction and, at one point, more than an hour passed without a hand going to showdown. Possibly the least likely of the final eight players to be involved in this scenario was Max Silver – and indeed he was the first to depart.

The Wheels Come Off The Silver Rollercoaster

Max Silver is a really nice guy and both exhilarating and frustrating. You cannot fail to wish him well, but after blowing tournament winning chip leads in the UKIPT Dublin and the WSOPE Shootout, the wheels came off the Silver rollercoaster once again in the WSOPE Main Event. By mid-afternoon on Wednesday, Silver had built up a commanding chip advantage but lost valuable hands to Jake Cody and Chris Moorman when maybe a little moderation in his betting would have been more prudent. Yesterday it took just ten hands for the Londoner to cast all his chips into the centre of the table with A♠ K♥, only to be picked off by Chris Moorman´s J♣ J♥. Possibly the new PokerStars Time Tourneys will be more to his liking!

Cody´s Good Run Takes a Turn For the Worse

Elio Fox´s most dangerous challenger, Jake Cody, was eliminated in seventh from the tournament in the cruellest of circumstances. Jake had been making inroads into Fox´s chip lead when the two clashed in the most significant hand of the day. Fox, who was only at the final table due to hitting a fortunate set of Tens to best Arnaud Mattern´s pocket Aces and Alex Dovzhenko´s Ace-King on Day 4, was again dealt 10♥ 10♣ and 4-bet Jake Cody up to 600,000 chips before Cody announced he was all-in for his remaining 3 million chips. Fox snap-called, but was in deep trouble as Jake tabled the J♥ J♦.

It Could Have Been Very, Very Different

The flop of 8♦ 7♣ 6♥ kept Jake firmly ahead, but he did not want to see a Nine or Ten in the remaining two cards. Incredibly, the 9♥ was the very next card out on the turn and, with neither of the two remaining Tens dealt on the river to give Jake a better straight, the Tens of Fox proved lucky for the New Yorker once again as Jake was sent to the rail in seventh. Had that 9♥ not have been drawn, Cody would have taken a 4 million chip advantage, and Fox would have almost certainly been the next player to be eliminated.

Blain Up and Gone

Instead it was unofficial WSOP Player of the Year leader Shawn Buchanan who was next to leave the table when he ran his 10♥ 10♣ into Dermot Blain´s A♦ 4♣. Despite being way ahead, the flop of Q♦ 3♦ 2♦ gave Blain multiple outs, and the A♣ on the river sealed the Canadians fate and sent him to the rail in sixth. Dermot Blain´s newly acquired chips did not last very long. After folding a three-bet to Chris Moorman´s shove, Blain pushed his last 2 million chips with K♠ Q♥ into Brian Roberts´ A♥ J♣. The flop of A♣ Q♣ 2♦ kept Roberts firmly in the lead, and with no help from the turn or river, Blain was sent to the rail in fifth.

Roberts Next to Go

It appeared for a while like the last person to bust a player was the next to go. After Blain bust Buchanan and Roberts bust Blain, it was indeed Brian Roberts who was next to be eliminated. Both Moorman and Fox had been chipping away at Roberts´ stack, and after Moorman shoved from the small blind for the umpteenth time into Roberts´ big blind, the American had enough. Calling Moorman (Q♥ 4♥) with J♣ 8♥, Roberts was ahead after the 8♠ 6♦ 7♦ flop but, in a Cody-esque sickener, the 5♦ appeared on the river to give Moorman the straight and eliminate Brian Roberts in fourth.

No Triple Crown for Kranich

We commented yesterday about how Moritz Kranich had one big win each year, but there was to be no Triple Crown for the player who won the EPT Deauville in 2009 and WPT Bellagio Cup in 2010. Being at a major chip disadvantage behind Fox and Moorman, Kranich had to take chances. Shoving into Elio Fox (9♦ 9♣) with 4♥ 5♥ it looked as if history would be repeating itself again when the flop came down 7♠ 6♦ 2♥, but this time there was no life-saving straight draw to rescue the German and he was sent to the rail in third.

When Elio Fox and Chris Moorman settled down to battle it out for the Heads Up conclusion to the WSOPE Main Event, Fox had a chip advantage of 11.095 million to Moorman´s 6.720 million. Chris Moorman started strongly, taking six of the opening seven hands, but Fox stopped Chris´s rise with more good luck. On a flop of J♣ 6♣ 5♣, Chris fired in a bet of 625,000 and followed it up with a further 950,000 on the A♠ turn. Both players checked through the 10♣ river, with Fox turning over the J♥ 2♣ for the smallest of club flushes. Chris, now crippled, mucked his hand.

More Drama in the Final Hand

The final hand of the tournament still contained a twist – nearly. Chris shoved all-in with A♥ 7♠ against Fox´s A♦ 10♠ and, although Fox was ahead by a mile, the flop of 4♠ 3♥ 6♠ gave Chris the opportunity of pairing his Seven or getting a Five for the gutshot straight. Chop options also appeared with the 6♦ on the turn, but the 8♥ on the river put an end to Moorman´s aspirations for his first WSOP bracelet and instead gave Elio Fox the title of WSOPE Main Event Champion.

Most observers agree that the WSOPE Main Event was one of the most intriguing and captivating yet. It may have lacked the novelty value of Annette Obrestad´s inaugural victory in 2007 and the raucous “home” victory of James Bord last year, but for drama, excitement, upset and skill, there has been none better. There is no doubt that Chris Moorman is a fingertip away from claiming his first major live tournament to go with the millions he has won online, a strong suggestion that Jake Cody would have won the event except for the cooler of a hand which saw him eliminated and that Max Silver has the potential to become a world champion – when he improves his endgame.