Several victories in key races in Tuesday’s election are seen as beneficial to the prospects of federal online poker legislation in the U.S. 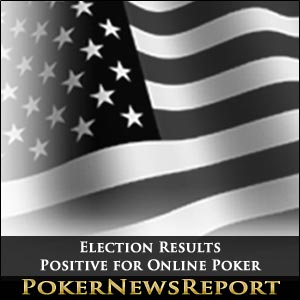 Several victories in key races in Tuesday’s election are seen as beneficial to the prospects of federal online poker legislation in the U.S.

President Barack Obama has four more years in the White House. Although his administration has been neutral on the Internet poker issue, Mitt Romney and the Republican Party platform were opposed to online poker. The GOP had intentions of prohibiting online gambling and seeking a reversal of the DoJ’s December 2011 ruling on the Wire Act that has prompted states such as Nevada and Delaware to enact various forms of Internet gambling regulations.

Sen. Harry Reid retained majority leadership in the Senate and Democrats gained greater control, taking a 55-45 advantage following tabulations of American voters. Republicans retained control in the House of Representatives. That included Dean Heller’s narrow victory over Shelley Berkley. Although both Heller and Berkley are online poker advocates, Heller has been quite influential in drumming up Republican support for the much-publicized Reid-Kyl bill. Many observers are of the mind that passage of an online poker bill during the lame-duck session will have no chance of happening without Heller’s lobbying efforts.

Heller is confident that despite a recent public spat with Reid, he and his Nevada colleague can put the past behind them with the goal of passing Reid’s measure. Prior to the election, Heller told the LVRJ, I have no doubt when this race is over, Senator Reid and I will sit down and say, ‘OK, we got this behind us, now let’s work together and get this [Reid-Kyl bill] done.’ And I have no doubt that it needs to get done by the end of the year.

The pieces are now in place for the poker bill to be introduced in Congress. However, although it may be a big deal to poker players, the Reid-Kyl bill is not such a big deal in Washington. In that regard, the measure most likely must be attached to another, more extensive bill to be passed into law. Industry experts believe that the choices are somewhat limited in which to attach a bill such as that drafted by Reid and the retiring Jon Kyl. However, the possibility does still exist and the odds would have been much less had Tuesday’s elections turned out differently.