UK poker player Rupert Elder made the trip down under worthwhile when capturing the first championship event of the 2013 Aussie Millions. 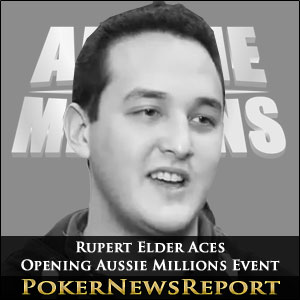 UK poker player Rupert Elder made the trip down under worthwhile when capturing the first championship event of the 2013 Aussie Millions.

Elder entered the final day of the AU$1,100 buy-in NL Hold´em tournament with a significant chip advantage, but faced some quality opponents including EPT Prague winner Martin Finger from Germany and last year´s winner of this event – Australian Brendon Rubie.

Indeed, it was home favourite Rubie who started strongest – taking a 400,000 chip pot in the first hand of the day from Finger with a paired King and then rivering the 10♠ to capture another 200,00 from Elder. Rupert Elder´s poor start turned into a nightmare as he first doubled up Martin Finger (A♠ K♣ > A♣ J♦) and then Fabian Craib (A♥ 5♦ > 3♠ 3♦) in successive hands to slip to 1.65 million chips.

Elder Springs Back at Warner´s Expense

The first player to depart the final table was Nali Kaselias, who ran his A♦ 6♠ into the pocket Queens of Ted Nguyen and never found the Ace he needed to double up. Ashley Warner, who had seen his chip stack depleted by the aggressive betting of Phillip Libeau, soon followed him when ambitiously shoving him last 1.25 million chips with K♣ 7♣ and being called by Elder with 9♥ 9♠. The pocket Nines held and Warner was eliminated in ninth position after starting the day second in chips.

As the blinds rose to 30,000/60,000, Phillip Libeau´s aggressiveness shot himself in the foot as he was first crushed by Brendon Rubie (A♠ K♥} > Q♣ 9♣) and then sent to the rail by Fabian Craib in a Q♥ Q♣ > A♣ 8♥ race. The final table became six-handed when Craib hit 7♦ on the flop to come from behind against Marwan Nassif (A♥ 7♠ > A♣ Q♥) and in-between all the eliminations, one of the tournament´s pivotal hands occurred.

Rubie Gets His Fingers Burned

After Ted Nguyen was eliminated in sixth position by Rupert Elder (2♠ 2♥ > A♠ 9♦), Rubie eventually bust in fifth when his J♣ Q♣ failed to improve against Elder´s 6♦ 6♣ (Elder hit a set on the flop which turned into Quads on the Turn). Rupert Elder completed a hat-trick of eliminations when his A♦ K♠ out-kicked Dusan Stoevski´s K♦ 9♦ and took a substantial chip advantage into the three-handed play against Martin Finger and Fabian Craib – Elder 7.00 million – Finger 4.30 million – Craib 1.97 million.

Rupert Elder extended his lead when tabling A♠ 2♣ on a paired board to knock a further million chips off of Martin Finger´s stack and then made it four eliminations in a row when his 10♥ 10♣ was too strong for Fabian Craib´s shove with 6♠ 6♦. Going into the Heads-Up, Rupert Elder had 10.4 million chips in front of him compared to Martin Finger´s 2.95 million, and it did not take long for Elder to use his advantage to wrap up the tournament.

Just a few hands into the Heads-Up and with blinds now at 50,000/100,000, Rupert Elder (K♦ 10♠) opened for 200,000. Martin Finger (Q♦ 7♥) made the call and checked the flop of 2♠ Q♠ J♥. Elder bet 175,000 and after Finger had check-raised up to 450,000. Elder shoved his colossal stack into the middle and Finger made the call. Martin Finger hit the Q♣ on the turn to give him trip Queens and looking like he was going to get a valuable double-up, but the A♣ on the river completed Rupert Elder´s straight to give him victory in the first Championship event of the Aussie Millions 2013.