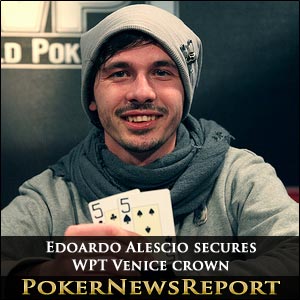 Alescio picked up a cheque for $255,842 after seeing off final-table fiend Steve O’Dwyer in a five-day event that attracted a disappointing starting line-up of just 213 players, although there were 18 re-entries, as well.

Following on just a few days after a record-setting WPT Prague main event that attracted 571 entries, the Venice tournament was always going to struggle to match that figure. However, Alescio still had to overcome some big-name stars to lift the title.

Alescio was most certainly considered the underdog when coming face-to-face with experienced – and highly successful – American O’Dwyer in their heads-up battle, particularly as the Las Vegas-based pro had dominated the six-handed final table.

While O’Dwyer eliminated Alex Dovzhenko, Andrea Benelli and Andrea Dato, he could not defeat Alescio – who ousted Day 4 chip leader Michele Caroli – in their head-to-head.

Having eliminated Caroli in third place for $86,990, Alescio was still not expected to take the title, particularly as O’Dwyer has enjoyed such an incredible season that has seen him make 11 previous final tables, of which he managed to get to heads-up five times – winning three.

However, the Italian battled back from being way behind on chips to eventually hold his own 2 to 1 advantage over the American.

Alescio showed great determination to stick in against O’Dwyer, before going all-in on a board that showed Q♣ 9♦ 4♦ 7♣ following the flop and turn.

Alescio held 7♦ 6♦ and O’Dwyer showed Q♠ 10♠ to be ahead in the title race. However, when the dealer placed the 8♦ river on to the felt, Alescio had secured a flush to take that lead.

O’Dwyer and Alescio were all-in pre-flop, with the former holding A♣ 7♠ and the latter showing 5♠ 5♣.

While the American found an ace to hit top pair, Alescio also picked up a five for trips to emerge victorious from what was a thrilling encounter. O’Dwyer left with $125,740 to his name, though.

O’Dwyer – who lifted $259,452 for winning the $5,000 No-Limit Hold’em event at the Bellagio Cup VII in July, as well as picking up an enormous $726,790 for his runner-up spot in the £5,000 No-Limit Hold’em main event at October’s European Poker Tour (EPT) London – was certainly in command for most of Day 5, having taken control early on the final table.

His first victim was Ukrainian Dovzhenko, who had entered the final table as the second-shortest stack.

O’Dwyer, in the big blind, re-raised all-in, with Dovzhenko making the call. The Ukrainian showed 9♦ 9♠ to be up against O’Dwyer’s A♦ K♥.

O’Dwyer then took care of Benelli. The Italian was now the short stack at the table, holding only 76,000 chips, so got every one in pre-flop against his American opponent.

O’Dwyer and Caroli called, before checking down on the 9♣ 8♣ 2♥ Q♠ Q♦ board. The trio then revealed their hands, with O’Dwyer tabling Q♣ 10♠ for three queens, Caroli showing K♥ 3♥ for a king high, and Benelli revealing K♣ 10♥ for another king high.

But it was the American who took the pot to eliminate Benelli in fifth place for $45,087.

The American recorded his third knockout in quick succession when sending Day 1 chip leader Dato to the rail in fourth place for $56,822.

Now down to three survivors, this is when Alescio moved up a gear, regularly showing against raises from his opponents.

However, Caroli eventually decided enough was enough and called while holding A♣ J♠. But Alescio showed the dominant A♠ Q♣ and, following a flop of 9♦ 5♣ 3♣, Caroli was in deep trouble.

The turn card of the 8♠ gave Caroli no help, and it was the same story with the 2♦ river, so ending Caroli out in third.

Then came that amazing heads-up scrap that ultimately went the way of Alescio to ensure that an Italian took down the Venice event.

Just 15 players made it to Day 4, with British star – and the only former WPT champ left in after his success in Bratislava back in March – Roberto Romanello, of Wales, crashing out first place for $8,986.

Next out was Italian Wanny Piazza in 14th while American Ronnie Bardah soon joined him at the rail in 13th, with both leaving with $8,986.

Home player Fernando Cimaglia exited in 12th and was soon followed by Frenchman Arnaud Mattern in 11th and another Italian, Dario Rusconi, in 10th – the trio leaving with $9,779 each.

French star Christopher Creus exited in ninth for $14,229 and Germany’s Marvin Rettenmaier left in eighth for $19,770 to leave just one more elimination before the final table bubble was burst.

The unfortunate player was Spaniard Alejandro Sanchez, who did still leave the table with $26,884 in seventh place.

Day 3 had seen Nicola Ricciardelli become the money bubble boy when he exited in 28th place.

The Italian moved all-in pre-flop with his last 39,000 chips to get a call from Dovzhenko. Ricciardelli showed A♠ K♠ while Dovzhenko held 10♠ 10♦. The board showed 7♥ 6♣ 4♣ J♠ 7♠ to give the Ukrainian two pair and eliminate the unlucky Ricciardelli.