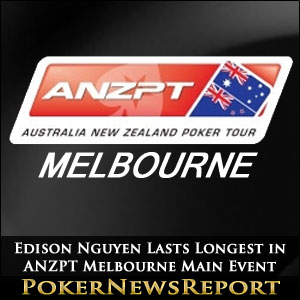 The ANZPT Melbourne Main Event set new records for the number of players competing in an ANZPT tournament and the total prize money up for grabs. 516 players entered the AUD2,200 buy-in event – creating a prize pool in excess of one million Aussie dollars for the first time in ANZPT history (AUD1,032,000 = $959,000).

From the massive entry, 179 players survived into Day 2 – during which the 63-player money bubble burst in incredible circumstances. Hand-for-hand play had been in progress for several hands when chip leader Vincent Chua put Corey Kempson all in on the board of J♦ 7♥ 3♦ / 2♥ / 2♠. Kempson deliberated for an eternity before making the call with 9♠ 7♠ for a pair of Sevens, before Chua turned over 10♠ 8♠ for a missed gutshot straight.

Even more drama was to follow in the next hand, when short-stacked Mike Fraser moved all-in with A♣ A♠ and got a call from Michael Chrisanthopoulos (A♥ Q♥). Fraser looked good for the double up after the flop of 8♦ J♠ 10♦, but the K♠ spiked on the River to give Chrisanthopoulos a Broadway straight and elevate him to the top of the chip counts.

After the bubble burst, play continued until there were just thirty-four players remaining – Vincent Chua regaining the chip lead after knocking out Luke Sharpe A♠ K♠ > A♦ K♥ on a board containing three spades – and those thirty-four players returned to the Crown Casino in Melbourne yesterday to play down to a winner.

The final day of the ANZPT Melbourne was a very long one. It took nearly seven hours of play to reduce the thirty-four survivors to a final table of nine, during which time short-stacked players were doubling up for fun. Amazingly eventual winner Edison Nguyen recovered from being reduced to 120,000 with a series of double ups, which included surviving with 9♦ 5♦ against Wayde Rickhuss´ A♣ J♣.

The chip leader going into the final table was Dennis Huntly, who had clashed with another deep stacked player – Joe Reina – when just twelve players remained. Reina had moved all-in with 5♠ 3♠ after the flop of 5♣ 6♥ 3♥, and Huntly was happy to make the call with 6♠ 6♣ for top set. Reina got no further help from the board and was eliminated in twelfth place, while Huntly maintained his advantage until the final table was set.

The final table began with blinds of 15,000/30,000 (ante 5,000) and it was not long until the first player was to depart – Cameron Bryce running his pocket Sixes into Dennis Huntly´s A♦ A♥. However, it was almost another two hours before Gabriel Messo was to miss the board with his K♣ 10♠ to fall in eighth place against Luke Spano´s 10♥ 10♦, and then both Dylan Honeyman and Vincent Chua were eliminated in a hand which saw Corey Kempson move to the top of the chip counts.

Kempson had only just survived in a hand against Dylan Honeyman when rivering a King-high straight to double up K♦ Q♠ > A♦ K♣, and when Honeyman moved all-in for his last 245,000 chips, Kempson moved in over the top. Vincent Chua also made the call for his last 900,000 chips, and the cards were on their backs:

The board ran 6♠ 9♠ 5♠ / K♠ / A♣ to give Corey Kempson a King-high flush and eliminate Dylan Honeyman in seventh place and Vincent Chua in sixth place – Kempson subsequently moving to the top of the leaderboard after forcing Edison Nguyen out of a valuable pot.

Nguyen Starts to Rise but Kempson Leads into Heads-Up

Edison Nguyen had continued being active throughout the final table, and took a massive pot against Luke Spano with a Full House of Five > Threes against Spano´s trip Threes. Nguyen then eliminated Wayde Rickhuss K♣ K♦ > A♥ Q♠ before Corey Kempson bust Luke Spano in fourth place 9♦ 9♠ > A♣ 3♥ to reduce the ANZPT Melbourne Main Event to just three players.

Three handed play continued for over three hours, during which time Edison Nguyen, Corey Kempson and Dennis Huntly each took the chip lead; but the poker gods were favouring Edison Nguyen and he eventually sent Dennis Huntly to the rail in third place J♦ 7♣ > A♥ K♠ when rivering the 7♥.

Despite having a 5.4 million -v- 4.9 chip advantage going into the heads-up, a visibly tired Corey Kempson agreed to a deal that would see Edison Nguyen lock up AUD215,000 while Kempson took AUD195,500. This left AUD7,500 and the trophy to play for; although there were further strange goings on during the climax of the event.

Corey Kempson made no secret of the fact that he was tired of playing, but was warned about his conduct by tournament officials after raising a pot to 4 million chips – leaving just 400,000 chips behind – and then folding his cards when Edison Nguyen moved all-in. Kempson doubled up to 800,000 chips in the next hand when flopping a pair of Deuces to win K♥ 2♥ > K♦ 4♣, but the final hand was not long in coming.

In the final hand, both players went all in blind. When the cards were turned over Edison Nguyen had Q♥ 6♣ and Kempson 6♦ 4♦. Edison Nguyen paired his Queen on the flop of 7♠ 9♥ Q♦, and there was no runner-runner escape for Kempson, as the board completed 9♣ on the Turn and 4♥ on the River – Nguyen Edison winning the ANZPT Melbourne Main Event after more than fifteen hours of play on Day 3 – another record for the Australia and New Zealand Poker Tour!