Ed Walsh Stars in Event #20 of the Borgata Poker Open

Ed Walsh played the starring role in Event #20 of the Borgata Poker Open – literally stealing the limelight in the heads-up from Hollywood actor James Woods. 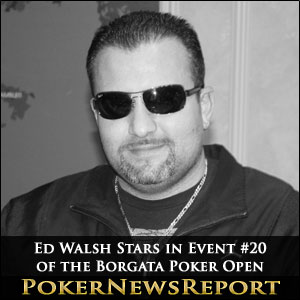 Ed Walsh played the starring role in Event #20 of the Borgata Poker Open – literally stealing the limelight in the heads-up from Hollywood actor James Woods.

Finding a personality amongst a large field of poker players is hardly unique – PokerStars have been signing up sports stars for years, and US sports players regularly attend the WSOP during off-season. However, to find a personality that can play poker, maintain a sparkling conversation at the tables and be unlucky to be denied victory in a major event – that is something pretty special.

Yesterday morning mortgage broker Ed Walsh from Newtown Pennsylvania might have woken up and wondered if it had all been a dream. But he will rubbed the sleep out of his eyes, seen the Borgata Open trophy and remembered the day he beat James Woods in the $350.00 buy-in NL Hold´em Event #20. But it could have been very different … …

Setting the Scene for a Good Game of Poker

Event #20 of the Borgata Poker Open was a one-day affair, practically overshadowed by the start of the WPT Borgata Main Event, but which attracted 338 buy-ins and created a prize pool of $118,300. The top 36 players were to cash in the event and, by the time the money bubble burst, actor James Woods was way ahead of the field with 375,000. He would have more he joked, “but somebody cracked my Deuces”.

Woods was well over 1 million chips by the time that the final was set – having won a couple of large pots with Aces > A-K and a pair of Threes which developed into a Set > pocket Jacks – but Ed Walsh had taken over the chip lead after both he and Woods hit a flopped set (Woods´ was better), but Walsh rivered Quads in the biggest pot of the game to date.

With blinds of 12,000/24,000 – ante 3,000 – there was no rush to leave the table and get a good night´s sleep before the WPT Championship event got underway. When the first elimination occurred, it was more than an hour after the ten players had first sat down and it was in the most unfortunate of circumstances – Divakaran Marella flopping a set of Nines against Chris Cornell´s pocket Jacks, but then Cornell rivering a Jack for a set > set win and eliminating Marella from the tournament in tenth.

There was no hard-luck story for Jeffrey Cole, who had been nursing his short stack for almost two hours before shoving his K♠ 2♠ into Ken Severinsen´s A♥ 6♥ and getting no help from the board to be bust in ninth. Thereafter, Woods was in top form – busting player after player out and reminding the event photographer to “Get a picture of us together, because he’s going out.” Eventually just Woods and Walsh remained – Woods having a 2.5:1 chip advantage that was overturned in the pivotal hand of the tournament.

After Walsh had taken another 800,000 chips from Woods in a two pair > top pair hand, James Woods got the last of his chips in with K♠ 3♠. Unfortunately for the Hollywood legend, Ed Walsh had woken up with pocket Queens, and although a Three on the Flop gave Woods more options than his three-outer King, nothing arrived to save him on the Turn or River and Ed Walsh had won Event #20 of the Borgata Poker Open.