Get ready for PartyPoker’s Premier League Poker V, all you couch potato poker fans out there! 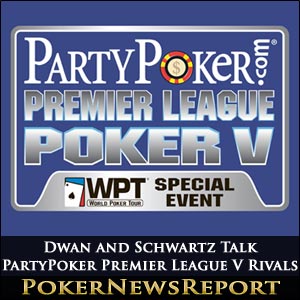 Get ready for PartyPoker’s Premier League Poker V, all you couch potato poker fans out there!

Yes, the first episode is coming to a television screen near you – if you’re in the UK and Ireland, that is – with Sky Sports HD2 beginning their run on Tuesday, June 5, in a series of shows presented by Team PartyPoker Pro Kara Scott.

Here is the trailer that shows some great chat, putdowns and big talk from the players that lined up for the event that was held in Vienna’s Montesino Casino early last month. But some of the best quotes from Tom ‘durrrr’ Dwan and Luke ‘FullFlush’ Schwartz about their opponents ahead of the 16-player, $125,000 buy-in tournament deserve to be seen in written English – particularly those from the always-gregarious (and sometimes controversial) Englishman.

Stay Focused – Or Blow Your Chances

Now, before continuing, if you don’t know who won the $500,000 first prize, this is a SPOILER ALERT! I will be mentioning the victor. Still, even if you haven’t any idea who took down the huge cash prize, I’ll give you another warning before mentioning his (or her) name. So stay focused – as if you were facing Phil Hellmuth heads-up in the World Series of Poker main event.

New Jersey’s Dwan tends to be ‘pretty’ nice about everyone, but the same can’t be said for north London’s Schwartz, although I reckon there’s always a certain amount of glee and hilarity in his criticisms – as if he’s just looking to wind up a few fellow pros. He might well succeed here.

Dwan, while obviously one of the nice guys, can provide backhanded compliments, too, especially when talking about Lithuanian-Aussie Tony G.

Tony G, I’ve said this a bunch of times, plays way better than people think he plays. That said, everyone thinks he’s the worst ever, so it’s not too much of a compliment – and I have seen him play really bad. But, when he wants to, he can play pretty good.

Or what about this? Ah, Erik Seidel plays pretty good. He’s had a pretty good record lately. He plays pretty tough. Tom thinks the eight-time WSOP bracelet winner has had a ‘pretty good’ set of results recently, huh. Well, if winning more than $6.5 million last year from live tournaments is only ‘pretty good’, I reckon he has to consider what constitutes ‘very good’.

Dwan, who certainly hasn’t been setting the world alight with his play of late, also had some words about Schwartz – and, while seemingly critical at first glance, read through them again and take in what he really means.

Luke Schwartz plays very goofy. He plays his style pretty well – but his style is definitely very goofy. But he’ll play different from one time to the next and I’ll only play with him every six months or a year or whatever. But he plays definitely outside of the box.

But the likeable pro can also have fun, saying: Phil Laak is, like, way past outside the box. He’s a complete goofball, while he reckons that Eugene Katchalov is very similar to Erik Seidel – plays pretty good, pretty tough, generally pretty standard, but not always as they both mix it up just the right amount.

Patrik Antonius Is ‘One Of The Best’

Additionally, Tom reckons Trickett – whom he’s played with a bunch lately in Macau – has actually changed his game a bit – but he’s generally pretty good, while adding that Finnish star Antonius is one of the best poker players in the world…he’s very tough at every game.

His belief that Antonius is a quality player is backed up by his saying that I know he said he felt rusty in No-Limit lately, but I haven’t really seen it. Then again, we’ve only played about 200 hands. But every time I play with Patrik, I think he plays pretty good.

Certainly, the States star is also impressed by one-time WSOP champion Selbst, saying: Vanessa, I played with a lot a few years ago. But maybe we haven’t been at the same tourney tables. I haven’t played much with her in the last few years, but I’ve always thought she plays pretty good and I assume that’s still the same.

A smiling Dwan is also a fan – if a slightly reluctant one – of Timoshenko, stating that: Yevgeniy might take a while in his decisions, but he does usually end up making decent ones. You know, you’ve got to sit there for a few minutes. But he does play pretty good.

Elky ‘Has Some Tilt Stories’

However, he left his most telling assessment for last when discussing French star Grospellier – highlighting the London-based pro’s tendency to lose his cool at the felt. He said:

Ah, Elky can occasionally tilt and has some tilt stories in the past. But he usually plays really good and he is also good at being very creative and thinking up new strategies, new lines… I wouldn’t call his play goofy, but he’s definitely pretty tricky and can make some tricky bluffs and non-standard lines. But he plays well overall.

Now that Dwan’s appraisal of his PartyPoker Premier League V opponents is out of the way, what of Schwartz’s less-than-kind evaluations?

Englishman Unconvinced by Laak and Frankenberger

The No-Limit Hold’em specialist said: Frankenberger, he’s done well on Wall Street, so he’s obviously a clever guy. He hasn’t been playing poker for too long, so I can’t criticise his game too much. He’s done well for the amount of time he’s been playing, but I don’t rate his game at the moment. Maybe he can improve.

As for ‘The Unabomber’, Schwartz reckons the thing with him is he’s actually pretty good at maths and he’s good at backgammon, so he should be a lot better than he is at poker. His actual technical poker game is not very good, but his speech play is pretty good and he gets under people’s skin and talks during hands – even in his own hands – so the more inexperienced players, he can get a big edge on them. But I don’t like his actual technical game very much.

Not the kindest of words, but the outspoken Englishman did have more positive thoughts on some of his other opponents – particularly Ukrainian duo Timoshenko and Brooklyn-based Katchalov.

He said: Timoshenko is just solid. He’s good at these formats. He’s always a favourite in my book in these formats, while adding that Katchalov is similar to Yevgeniy in a way – he’s also pretty tight…tight and solid, you know, he won’t make a big mistake.

When it comes to fellow Englishman Trickett, Schwartz was not convinced that he would do well in the Premier League, saying: Sam, he’s won a lot over the last few years. He’s got a lot of confidence – he plays very aggressively. This type of format, I’m not sure if this is his strongest form of poker.

How Accurate Are Duo’s Assessments?

So, there you have it. Dwan and Schwartz have had their say regarding how many of their rivals would fare in Vienna. But how accurate are those opinions? Of course, many of you will already know the result, but do you think the duo are too harsh, too kind or just about spot on in what they had to say pre-tournament? Let us at Poker News Report know what you think…

NEW SPOILER ALERT!!! Strangely, neither Dwan nor Schwartz mentioned the eventual winner. But I can’t imagine Ohio’s Scott Seiver will be particularly worried about that as he quietly, yet effectively, made his way to the half-a-million bucks that was on offer to the winner.

However, if I were Schwartz, I’d be very wary during this WSOP in Las Vegas. He might well have annoyed a few of his fellow pros – and some don’t take too kindly to that sort of thing.

So, remember to check your back, Luke!