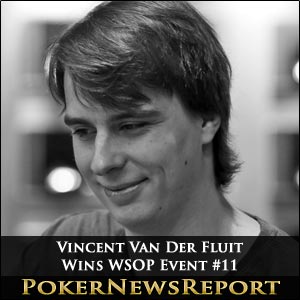 The event started with 970 players at the Rio All-Suite Hotel & Casino, but that eventually became just one when Utrecht’s Van Der Fluit defeated American Charles ‘Chuck’ Tonne in their heads-up clash that saw the runner-up collect $164,132 from the $1,309,500 prize pool.

The final table took just four hours to complete, with Van Der Fluit taking the top prize and gold bracelet for his first WSOP crown by outlasting WSOP Circuit champ Tonne, of Michigan, who had started Day 3 as chip leader.

Just nine players returned for the third and final day, with five nations represented and only one previous bracelet winner, Tristan Wade. But it was high-stakes specialist Van Der Fluit who emerged victorious.

Heads-up play reflected how fast the whole event had passed, although Van Der Fluit (two million) and Tonne (2.3 million) did start out with almost even chip stacks. However, Van Der Fluit chipped away at Tonne’s stack, with one hand in particular setting the Dutch player up for his famous victory.

The Dutch Star Flushed with Success

The first elimination arrived when San Diego’s David Schnettler hit the rail in ninth place for $18,896. The Californian, who returned as one of the short stacks, faced an all-in call from Ukrainian Alex Dovzhenko for his tournament life when the flop came 9♦ 10♦ J♥. Schnettler called, only to see that Dovzhenko had flopped the nut straight. Schnettler showed A♥ K♥ J♠ 5♥ and desperately required help, but was left disappointed when the turn came 9♥ and the river showed 10♠.

Calvin Anderson Out in Eighth

Only 10 minutes later, Yukon’s Calvin Anderson hit the rail in eighth place for $24,186. Anderson was all-in on a 6♦ 6♣ 10♣ flop, with Dovzhenko holding trip sixes and the American on a club flush draw. The 5♦ turn gave Dovzhenko a full house while the 3♠ river sent Anderson to the rail.

Kiev’s Dovzhenko – who had been the most involved player on the final day – eventually saw his luck run out when he lost a pot to Tonne to exit in fifth for $55,025. The K♠ 7♠ 8♥ flop prompted Dovzhenko to pot and Tonne re-pot. Dovzhenko was now all-in with a pair of aces, while Tonne had flopped two pair before turning a full house on the 8♠ turn for the knockout.

The players enjoyed a 30-minute break, but the next elimination arrived on the first hand back as Frenchman Damien Lhommueau hit the rail in fourth spot for $74,536. Lhommeau was all-in pre-flop against Tonne, with the American making a straight for the scalp.