Dusk till Dawn to Host World Poker Tour in November

The WPT Nottingham Main Event and a £500 “WPT National” will both have £1 million guarantees when the World Poker Tour comes to Dusk Till Dawn in November. 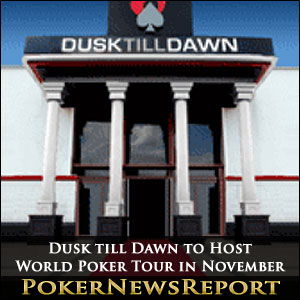 The WPT Nottingham Main Event and a £500 “WPT National” will both have £1 million guarantees when the World Poker Tour comes to Dusk Till Dawn in November.

Writing on the DTD Blog, club owner Rob Yong said that he was “delighted” that the World Poker Tour was coming to Nottingham this autumn, and gave provisional detail of the headline events that would be included in the seventeen day festival of poker.

In the blog, Rob Yong announced the dates of the festival as being from Friday 7th November to Sunday 23rd November, with the £3,000 buy-in Main Event getting underway on Tuesday 18th November and he anticipates that this will be the “biggest UK poker festival ever” – although acknowledging that the club will need a supersized marquee to accommodate the 2,000 players needed to meet the £1 million guarantee for the £500 buy-in “WPT National”.

Yong also announced that a new evening tournament will be introduced at the club in an attempt to qualify 1,000 DTD players into the WPT National over the next six months, with further tournaments at the club to be announced to qualify a target of 200 players into the Main Event. He wrote he was confident that Bwin.party (owners of the WPT) would qualify many hundreds more into the festival´s events.

In addition to the WPT Main Event and WPT National, Yong hinted that there could be a third £1 million guaranteed tournament during the Dusk till Dawn/WPT poker festival. Yong wrote that Simon Trumper – Dusk till Dawn´s Live Poker Director – will be over in Vegas for the WSOP, testing the water to see what response a proposed £10,000 buy-in High Rollers event would get to see if that too could be offered with a £1 million guarantee.

Details of the High Roller, plus three other events already pencilled into the festival schedule, will not be announced until the World Series of Poker is over, but the plans are to host six headline events over the seventeen days of the festival to ensure there is non-stop action at the Nottingham club. The six proposed headline events are:

Dusk till Dawn has also announced that the top fifty players in the club´s June £250 buy-in Deepstack Tournament (June 4th – 8th) will also win seats in the UK Poker Championship 6-Max Main Event that will take place between 12th and 17th August.

The £1,000 buy-in UK Poker Championship 6-Max Main Event is the highlight of Sky Poker´s 6-Max UKPC Series which takes place at Dusk till Dawn from Thursday 7th August, and the feature event has a guaranteed prize pool of £500,000.

The 6-Max Championships follows on from the successful UKPC Series played at the club in February, when twenty-year old Alexander Spencer took down the £125,000 first prize in the 621-player Main Event. The full schedule for the 6-Max Series can be found on Dusk till Dawn´s web site.