Dusk till Dawn Announces the Biggest Ever Grand Prix

Dusk till Dawn has announced that the DTD Grand Prix in September will have a £250,000 guarantee and potentially a £50K sponsorship deal for the winner. 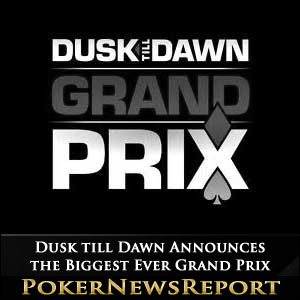 Dusk till Dawn has announced that the DTD Grand Prix in September will have a £250,000 guarantee and potentially a £50K sponsorship deal for the winner.

Following their expensive kick in the teeth at the ISPT Wembley (aka €589K overlay), Nottingham´s Dusk Till Dawn Poker Club has picked itself up off the Wembley Stadium car park, dusted off the debris left behind by Prosper Masquelier, and come back fighting with the announcement of its biggest ever Grand Prix Event.

The popular Grand Prix tournament – which has a £50.00 + £10.00 buy-in and which guarantees a minimum cash of £250.00 for everybody who makes it through to Day 2 of the event – will run from Sunday 22nd September until Sunday 29th September and will feature ten online Day 1s as well as four Day 1s hosted live at the Nottingham venue (Please note that the buy-in is in £ sterling – previous DTD Grand Prix buy-in´s have been in €uros).

Following the debacle of the International Stadiums Poker Tour (and it wasn´t their fault), Dusk Till Dawn are taking no chances that everybody leaves it until the last minute to qualify for the event, and are once again offering their Golden Chip early-qualification promotion.

The first 1,000 players to qualify for this September´s Grand Prix through the £5.00 buy-in online satellites, hosted six times a day on DuskTillDawnPoker.com, will be awarded a Golden Chip that will make them eligible for a £50,000 sponsorship package should they win the Grand Prix; which will then enable them to enter live poker events almost anywhere in the world during the following twelve months and keep half of their winnings when they cash.

Players in possession of a Golden Chip who make it to the eight-handed Grand Prix final table, but fail to win the event, will be rewarded with a €7,500 package to the iPoker Caribbean Poker Tour (In 2011, both Ian Turner and Michael Daryl Haney collected a €15,000 bonus for making the final table, in addition to sharing in that year´s €50,000 override – so it is worth qualifying for the DTD Grand Prix early!).

Players who qualify for Day 1 (or who buy-in directly) have the choice of playing online at 7.00pm or 9.00pm (BST) between Sunday 22nd September and Friday 27th September, or playing their Day 1 live at the club on Sunday (22nd), Wednesday, Thursday or Friday (cards are in the air at 5.00pm BST).

The top 10% of each Day 1 field will return to the Nottingham club on Saturday 28th September for Day 2 (and everybody will be guaranteed a min cash of £250.00) and the tournament will conclude on Sunday 29th September, when the winner could also pick up a £50K Dust Till Dawn sponsorship package.