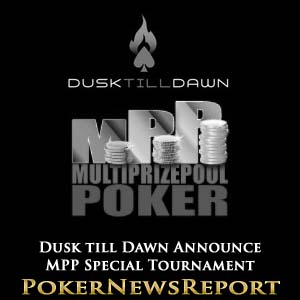 The Multi Prize Pool (MPPTM) “special” tournament will run in addition to the regular Thursday events and – for this first attempt at hosting an MPPTM poker tournament at a weekend – the guaranteed prize pool will be £30,000; split pro rata between the three buy-in levels of £50.00, £100.00 and £200.00.

The tournament kicks off at 5.00pm on Saturday 26th January and, because players will start with 20,000 chips rather than the 10,000 used in the Thursday MPPTM events, late registration is available for two hours. Players unfamiliar with how a Multi Prize Pool tournament works, should read our Guide to MPPs.

Tonight sees the second regular MPPTM tournament hosted at Dusk till Dawn for which the cards will be in the air at 7.00pm (late registration available until 8.00pm). The three levels of buy-in for the event are £25.00, £50.00 and £100.00 and, similar to last week, the tournament will have a £5,000 guaranteed prize pool.

Although last week´s MPPTM tournament attracted a guarantee-busting 177 entries, this week´s tournament is expected to be a little quieter, with competition coming from the UKIPT Edinburgh (where the Main Event starts today) and the weather – which is forecast to be dry but sub-zero.

Romanello actually got as far as the Heads-Up, but was prevented from capturing his own event after six and a half hours of play by fellow Welshman Brian Sheppard, who – because he had entered all three prize pools with his £100.00 buy-in – collected £3,040 for his victory.

Why Does Fifth Place Pay More than Third?

Good luck to all those playing at Dusk till Dawn tonight and wrap up warm!