Professional poker player Tom “durrrr” Dwan engaged in yet another of his Durrrr Challenge sessions against Dan “jungleman12” Cates on Tuesday in a poker session that lasted 258 hands and only 20 minutes with durrrr winning $30k. 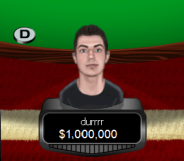 Professional poker player Tom “durrrr” Dwan engaged in yet another of his Durrrr Challenge sessions against Daniel “jungleman12” Cates on Tuesday in a poker session that lasted 258 hands and only 20 minutes.

The Durrrr Challenge is a cash game challenge that see’s Dwan take on an opponent over a total of 50,000 poker hands. This is the second challenge that he has offered and so far he isn’t having the luck that he would like, down a staggering $700,000.

That said, the duo’s latest clash saw Dwan leaving the action with a profit of $31,778 but the session lasted only 20 minutes due to the time constraints on both players at the moment.

The current challenge has so far seen 7,660 hands being dealt and with losses of $659,232, Dwan will be hoping that he has a change of luck pretty quickly otherwise risk losing more funds as well as the $1.5 million side bet.

Although the duo traded blows over the table, there weren’t any pots that would knock you off your chair while watching but that doesn’t mean that there wasn’t some high pace action.

With the stakes raised twice already, Dwan opted to simply call the raise and see what the community cards had to offer.

The board played a huge part in this hand, with the flop offering neither player anything that would empower their hand further, both opting to see the turn card with very little hesitation. The turn came and brought 3, a card that seemingly offered very little to both players once again, although the card did mean that the community board had 2 hearts within it.

Both players once again checked and the dealer dealt the river card, revealing yet another heart on the board in the shape of K.

The river card seemed to be the catalyst for both players, Dwan moving all in with the remaining $29,498 in front of him and Cates quickly called after him.

The showdown was more shocking than you would have expected, Dwan winning the hand after showing 28. Cates must have been fuming after seeing a hand like that beat him, especially after Dwan was forced to call a raise 3 times bigger than his original bet before the flop was even dealt.