McLellan joined an elite band of players to have won two UKIPT Main Event titles when demolishing the final table of the UKIPT Nottingham in a record time. 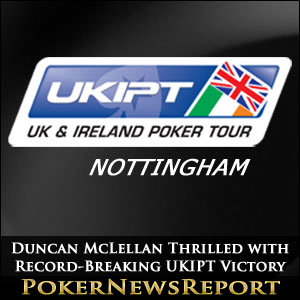 McLellan joined an elite band of players to have won two UKIPT Main Event titles when demolishing the final table of the UKIPT Nottingham in a record time.

When Duncan McLellan won the UKIPT Isle of Man Main Event back in November last year, he achieved his victory in less than four levels – although not quite beating Max Silver´s record of four hours set at the UKIPT Dublin in 2010.

Yesterday McLellan set that record straight by demolishing the final table of the UKIPT Nottingham Main Event in three hours and forty-nine minutes, to join Wojtek Barzantny, Nick Abou Risk and Joeri Zandvliet as a two-time winner of a UKIPT Main Event.

When the eight remaining players took their seats at the final table, the big chip leader was Willie Elliot, who had gone into the climax of the tournament with 5,625,000 chips. Elliot´s chip stack quickly grew to over 9 million chips when forcing both Ryan Spittles and Duncan McLellan out of big pots – reducing McLellan´s chip stack to 1.7 million chips.

Thereafter however, there was no stopping Duncan McLellan. He took his revenge on Elliot when flopping a pair of Kings to take down a 970,000 chip pot, and then eliminated Ramey Shaio (A♦ Q♥) in eighth place when his 4♦ 4♠ completed a Seven-high straight on the Turn.

Anthony Flynn was McLellan´s next victim when McLellan´s Q♥ J♥ paired on the Turn to best Flynn´s A♠ 7♠ and – after Angelo Milioto had doubled-up against Juan Benito (pocket Nines > pocket Sixes) – Benito joined Flynn on the rail in sixth place when McLellan´s 9♥ 9♠ spiked a set on the Turn.

Elliot Falls to Quads as Milioto Emerges as Challenger

Despite Duncan McLellan´s trio of knockouts, Willie Elliot still had a significant chip advantage; but, after Angelo Milioto had eliminated Ryan Spittles in fifth place A♦ 10♠ > K♠ J♠, Elliot´s chip stack started to disintegrate. Both Duncan McLellan and Angelo Milioto forced Willie Elliot out of big pots before the Scotsman was eliminated in the biggest pot of the tournament:

The A♦ on the River gave Duncan McLellan Quad Aces and, after Willie Elliot checked, McLellan lead out for 2 million chips. Elliot responded by moving all-in with his Full House, and McLellan insta-called; slamming his cards on the table to emphasis his victory in the pot and sending Willie Elliot to the rail in fourth place.

With the departure of Willie Elliot, Duncan McLellan´s chip stack had grown to more than 13 million, and he extended his advantage by busting Trevor Pearson in third place A♣ K♣ > A♥ J♠ to take a 17,440,000 -v- 6,930,000 chip advantage into the heads-up against Angelo Milioto.

Before heads-up play got underway, the two players decided on a deal that would see McLellan lock up £168,372, Milioto be assured of £143,728 and leave £34,000 and the trophy to play for. The deal failed to slow down the action, and within ten minutes it was all over:

Milioto called, and both players saw the 4♦ on the Turn which completed McLellan´s straight draw. McLellan played it cool however, and checked again to Milioto. Milioto fell for the trap – betting 1.3 million chips – and McLellan moved all-in. Milioto made the call and quickly knew his fate. Only a Queen or a Six would save him now, but the A♦ blanked on the River to give Duncan McLellan the title of UKIPT Champion for the second time.